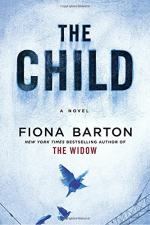 Get The Child from Amazon.com
View the Study Pack
Study Guide
Order our The Child Study Guide

Barton, Fiona
This Study Guide consists of approximately 96 pages of chapter summaries, quotes, character analysis, themes, and more - everything you need to sharpen your knowledge of The Child.

The Child Summary & Study Guide includes comprehensive information and analysis to help you understand the book. This study guide contains the following sections:

This detailed literature summary also contains Quotes and a Free Quiz on The Child by Barton, Fiona.

The following version of The Child was used to create this guide: Barton, Fiona. The Child. New York: Berkley, 2017. Hardcover.

The Child by Fiona Barton is a fictional mystery that follows the lives of four women as they interact following the discovery of a baby's skeleton at a London construction site. Newspaper reporter Kate Waters reads about the discovery in a small article in a competing paper. Always on the lookout for another big story, she begins to dig for answers, trying to learn the baby's identity and what happened to the poor child.

Meanwhile, another woman named Emma is worried when she hears the news that a baby has been uncovered on Howard Street where she lived when she was younger. The news crushes in on her, and she becomes exceedingly anxious. Her anxiety has been with her for years, but this is a new weight. She does not know how much longer she can keep her secret. Emma contacts her mother, Jude, to see if she has heard about the discovery near their former home and if the news upset her at all. Jude seems disinterested and wants to talk about her former boyfriend, Will, who has recently been back in touch. Emma dislikes Will and discourages her mother from getting involved again. She recalls all too clearly the many fights in their home years earlier. Will convinced Jude to kick Emma out of the house when she was only sixteen. Jude was so smitten with Will that she easily chose him over her daughter.

As Kate begins her search, she connects with Angela Irving whose baby girl Alice had been stolen from the hospital the same day it was born. Alice has been grieving for over forty years and somehow feels that this unearthed baby is her long - lost child. DNA tests confirm that the child does indeed belong to the Irvings, thus stirring the police to further their investigation into what happened to the baby so many years earlier. They soon discover that although the baby is seemingly Alice, evidence suggests that the body was only buried a decade after she was stolen, thus creating more questions without answers. Kate begins to search into the names and whereabouts of former residents to find anyone who may have had knowledge about the incident. She is assigned a young reporter as a trainee. Despite Kate's initial dislike of the newbie, the two become a great team.

Through lots of leg work and digging through old files, Kate and Joe uncover many details that fit together to solve the mystery of baby Alice. They are led to the former landlord, Al Soames. Soames, together with a partner, hunted for young women, drugged them, and photographed them following sex.

Kate and the trainee also get invited to a reunion party for the residents of Howard Street where they meet Emma, a woman who as a teenager lived in the house near where the baby was discovered. Emma ends up spilling her story to Kate and confesses that the building site baby is her own child. She explains how she got pregnant at age fourteen, kept the pregnancy hidden from her mother, gave birth to the baby, and then buried it in the garden. Once the truth is out Emma becomes emboldened to confront everyone involved in wronging her in the past. She tells Jude that it was Will who raped her and that is why she became a difficult teenager. Emma then asks for Kate's help in confronting the baby's father. Kate learns that Will raped Emma to keep her quiet about the photographs she discovered of naked women. Kate pieces together that Al and Will were partners and had dozens of victims, among them Emma.

As Emma comes forward to the police claiming the baby to be her own, the Irvings' world is once again thrown into turmoil. With a positive DNA confirmation from both women, they are lost as to where the mistake lies. Joe's online research leads them to conclude that both women are related to the baby, but that the buried child was not Alice. Alice was alive and was none other than Emma. With a confession from Jude that she had stolen baby Alice from the hospital forty years earlier in an attempt to secure a marriage proposal from her previous boyfriend, Charlie, the mystery is solved. Alice/Emma is reunited with her mother and father, and the weight of Emma's heavy secret is lifted from her. No charges are filed against Emma for burying her child. Following the trials of both Will and Jude, she and Angela are allowed to put the baby's remains to its final peaceful rest.

More summaries and resources for teaching or studying The Child.

The Child from BookRags. (c)2022 BookRags, Inc. All rights reserved.