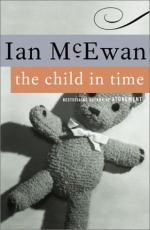 Ian McEwan
This Study Guide consists of approximately 33 pages of chapter summaries, quotes, character analysis, themes, and more - everything you need to sharpen your knowledge of The Child in Time.

The Child in Time Summary & Study Guide includes comprehensive information and analysis to help you understand the book. This study guide contains the following sections:

This detailed literature summary also contains Topics for Discussion and a Free Quiz on The Child in Time by Ian McEwan.

Stephen Lewis wakes on a Saturday morning and plans to take his three-year-old daughter Kate to the market for their morning's shopping. He leaves his wife Julie asleep in bed. At the market, Stephen takes Kate from the shopping cart and begins unloading the groceries to check out. When Stephen turns to check on Kate, she is not here. Thinking she has stepped back from the cart, he pushes it out of the way and searches for her, but cannot find her. A search of the street is unfruitful as is a search of the store's loading dock. Other shoppers get involved and the police arrive, but Kate is not found. Stephen then has to go home alone to tell Julie the news.

Over the coming weeks, Stephen spends all his time searching for Kate. He compiles lists of people who have a child who died, thinking that they might have taken Kate as a replacement child. Meanwhile Julie sits in the apartment, stirring only occasionally. One day Stephen comes home to find that Julie has cleared out Kate's room, bagging up all the items. Julie then goes away for a time and Stephen is taken in by a friend. It is soon obvious that Julie and Stephen together as a couple is only a statement of the fact that Kate is missing and Julie moves out. The two seem unable to face their loss together and this will prove to be their downfall.

Meanwhile, Stephen participates in a government committee charged with creating a handbook on child care only to discover that his friend, Charles Darke, has already written the book that is to be released as the culmination of the committee's work. Stephen is a writer of children's books, though he admits that he started on this career by accident. He had intended to write a story about a group of hippies on a journey and starts by writing about one of the characters spending a childhood summer with cousins. Stephen is eventually convinced by publisher Charles Darke to allow the book to be published as a children's book. Charles moves his life to the political realm but later moves to the country with his wife where he reverts to a child-like existence for a period of time before committing suicide.

After Charles' suicide, Stephen hears from Julie who summons him after months of absence. Stephen arrives to find Julie in labor with a child conceived during a sexual encounter. They finally talk about Kate and cry over her disappearance. Julie gives birth and they prepare to take their love and their new family into the future.

More summaries and resources for teaching or studying The Child in Time.

The Child in Time from BookRags. (c)2022 BookRags, Inc. All rights reserved.