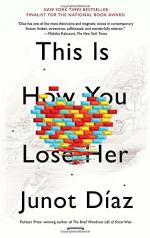 The Cheater's Guide to Love Summary & Study Guide includes comprehensive information and analysis to help you understand the book. This study guide contains the following sections:

This detailed literature summary also contains Quotes and a Free Quiz on The Cheater's Guide to Love by Junot Díaz.

The following version of this story was used to create this study guide: Diaz, Juno. “The Cheater’s Guide to Love.” This is How You Lose Her. New York: Riverhead Books, 2012. 175-213. Print.

“The Cheater’s Guide to Love” follows Junot Diaz’s recurring character Yunior through five years of his adulthood. At the beginning of the story, Yunior’s fiancée discovers that he has been cheating on her for the entirety of their six-year relationship. The fiancée ends their relationship, and Yunior moves to Boston, where he begins teaching creative writing at Harvard. In Boston, Yunior deals with racial persecution at the hands of police and citizens, and he suffers deep emotional turmoil in the wake of the break-up. He falls into a deep depression, but his friend Elvis acts as a comforting companion.

Yunior eventually overcomes his depression and begins dating a nurse named Noemi. However, he becomes frustrated by her reluctance to have sex with him, and he eventually loses his temper regarding the matter. Noemi then breaks up with him. Yunior then decides to focus on himself for a while rather than on dating. Yunior takes up running for regular exercise, but he eventually has to stop when he develops plantar fasciitis. He takes up yoga but eventually has to stop that as well when he develops severe back pain. Elvis, who is married and who has a young daughter, eventually confides in Yunior about his frequent marital infidelities.

Yunior begins dating a law student who soon leaves him for someone closer to her own age. However, the law student later returns saying that she is pregnant with Yunior’s child and that her boyfriend forced her to move out. Yunior lets her stay with him, and when she delivers the baby, she informs Yunior that the baby is not actually his. She then reunites and reconciles with her boyfriend. Elvis confides in Yunior that he impregnated a woman the last time he was in the Dominican Republic and that the woman gave birth to a boy. Elvis and Yunior then go to the Dominican Republic to see the woman and the boy. However, a paternity test reveals that the boy is not actually Elvis’s son.

After returning to Boston, Yunior continues to face emotional turmoil. One day, he looks at printouts of the e-mail exchanges between himself and the women with whom he was cheating on his fiancée. Yunior begins writing a fiction piece based on these e-mails, and he begins to feel as if he is beginning to finally overcome the grief regarding the break-up.

The Cheater's Guide to Love from BookRags. (c)2022 BookRags, Inc. All rights reserved.