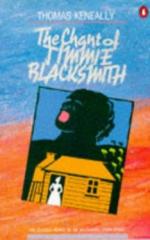 Thomas Keneally
This Study Guide consists of approximately 31 pages of chapter summaries, quotes, character analysis, themes, and more - everything you need to sharpen your knowledge of The Chant of Jimmie Blacksmith.

The Chant of Jimmie Blacksmith Summary & Study Guide includes comprehensive information and analysis to help you understand the book. This study guide contains the following sections:

This detailed literature summary also contains Topics for Discussion and a Free Quiz on The Chant of Jimmie Blacksmith by Thomas Keneally.

The Chant of Jimmie Blacksmith, by Thomas Keneally, tells the story of Jimmie Blacksmith, a man of mixed race, who goes on a killing spree in Australia in 1900. Keneally traces Jimmie's life, showing how he faced discrimination and oppression based solely on his race and how this eventually boiled over into an uncontrollable wrath. Taken from a fragment of Australian history, Keneally weaves together a fictional account of Jimmie Blacksmith's actions and his subsequent fugitive journey.

Jimmie is initiated into the Mungindi tribe, but he grows disillusioned and travels with Rev. and Mrs. Neville as they move to a new town. They encourage him to aim for a higher social status. They tell him that he should work to earn money for land and that he should marry a white girl from a farm. Driven by his ambitions and pride, he seeks work but finds that the white world wants little to do with him. His employers, including the police, treat him with contempt and distrust. They cheat him out of hard earned pay and Jimmie has little recourse but to accept it.

Meanwhile, Jimmie engages in a sexual relationship with a white kitchen maid named Gilda. When she becomes pregnant, they make plans to marry and find housing. Jimmie goes to work for the Newby family doing fencing and then sends for Gilda. When her baby is born, he realizes that the child is not his.

Several of Jimmie's relatives, Tabidgi Jackie Smolders, Mort, and Peter, arrive to bring him his initiation tooth from the tribe, which they believe will offer him protection from his white marriage. However, Mr. Newby seeks to drive off Jimmie's relatives, refusing to advance Jimmie money for food for his family. Goaded by Mr. Newby's arrogance and harshness, Jimmie reacts with revenge, killing Mr. Newby's wife, daughters, and a schoolteacher, Miss Graf. Thereafter, Jimmie and his family flee. Eventually Gilda, her baby, Peter, and Tabidgi are left behind, and Jimmie and Mort continue on.

In further retribution, Jimmie then enacts revenge on the Healy family, who he also worked for and was cheated by. He and Mort are almost caught on several occasions but manage to evade their pursuers, who include Miss Graf's fiancé, Dowie Stead. They take a schoolteacher hostage and force him to continue on with them. The schoolteacher, McCreadie, manages to convince Jimmie that he should go on without them as he is damaging Mort's native soul. Mort, who carries McCreadie to a farmer's house and sets him free, is later killed. Still on the run, Jimmie is shot trying to cross a river. He eventually takes refuge in a convent, where he hides in the guest room, coming out only when the nuns go to pray, but he is eventually captured and sentenced to death. As the novel ends, Tabidgi is hanged and Jimmie is awaiting the same fate.

More summaries and resources for teaching or studying The Chant of Jimmie Blacksmith.

The Chant of Jimmie Blacksmith from BookRags. (c)2022 BookRags, Inc. All rights reserved.