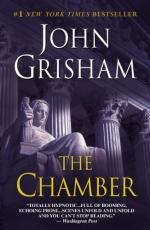 The Chamber Summary & Study Guide includes comprehensive information and analysis to help you understand the book. This study guide contains the following sections:

This detailed literature summary also contains Topics for Discussion and a Free Quiz on The Chamber by John Grisham.

The Chamber is a novel about redemption. Sam Cayhall is involved in a bombing and, after being convicted by a jury, lives in Parchman Prison awaiting his execution. At the time of the bombing, Sam is a member of the Ku Klux Klan. His family had been members for many generations and membership in the organization was part of his upbringing. Sam had also been involved in other crimes for which he had not been prosecuted. He and his brothers had participated in lynchings and he had murdered three men. At the time of his sentencing, Sam believes that his actions were acceptable. Over time, he develops remorse.

In addition to his clan family Sam has a nuclear family. He married and had two children. His son's name is Eddie, and his daughter Lee. Eddie and Lee do not share their father's sentiments regarding minorities. In fact, as a child, Eddie's best friend is a black boy who lives on the Cayhall property. When Sam kills the boy's father, Eddie is beside himself. The father-son relationship deteriorates, culminating in Eddie leaving Mississippi. After Eddie marries his wife, Evelyn, and they have their first child, Alan, Eddie decides to renounce the Cayhall family. He and Evelyn relocate to California, change their last name to Hall, and legally change Alan's first name to Adam. Later a daughter, Carmen, is born. Eddie never returns home and tell his children nothing about his side of the family. When Sam is convicted and sent to jail, Eddie can't stand the shame and commits suicide. Following his father's funeral, Adam is introduced to his Aunt Lee, Eddie's sister, who tells him the truth about his family. She, too, was scarred by her father's past, and has become a functioning alcoholic. Adam goes on to attend college and law school.

After graduating from law school, Adam applies for employment at the prestigious firm of Kravitz and Bane and is hired. Kravitz and Bane's pro bono department had been handling Sam's case for seven years. They had done a wonderful job, but Sam is guilty and is rapidly approaching his execution date. Adam asks to represent Sam, and travels to Mississippi to meet his grandfather. At the time that Adam first introduces himself, Sam has approximately one month left to live. Through hours of visits and sleepless nights, Adam battles hard for Sam's defense. Adam is unable to convince the courts to spare Sam, and his execution is carried out. Along the way, though, Adam moves through horror, disillusionment, and shame to arrive at an understanding and acceptance of Sam and his family's history. They develop a fondness for each other and Sam realizes that his crimes were wrong. He repents and dies at peace.