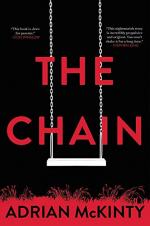 Get The Chain from Amazon.com
View the Study Pack
Study Guide
Order our The Chain Study Guide

Adrian McKinty
This Study Guide consists of approximately 62 pages of chapter summaries, quotes, character analysis, themes, and more - everything you need to sharpen your knowledge of The Chain.

The Chain Summary & Study Guide includes comprehensive information and analysis to help you understand the book. This study guide contains the following sections:

This detailed literature summary also contains Quotes and a Free Quiz on The Chain by Adrian McKinty.

Rachel Klein is on her way to an appointment with her oncologist when she gets the phone call that seems to be a prank or a nightmare. A voice informs her that her daughter Kylie has been kidnapped. Kylie will be returned, unharmed, if Rachel follows instructions. The instructions include that she is to wire $25,000 in bitcoin to a specific account. Rachel is not wealthy and she has no idea how she is going to make this happen, but knows she will. The second part of the instruction is that she has to kidnap another child. Kylie will be released once Rachel has done these two things, and Rachel will be off the hook as soon as the parents of the child she kidnapped pays a ransom and kidnaps another child. Rachel is terrified but she knows she will do anything to get Kylie back. She has a breakdown when she arrives home and the phone rings. The woman on the phone tells her she cannot continue to lie on the floor, indicating they are watching. Rachel goes to the bank the next day and a man strikes her, reminding her that someone else from The Chain is always watching. Rachel quickly pays the ransom, then begins to search for a child she can kidnap. She cannot believe she is taking that step, but she – like every other parent who has been caught up in The Chain – is willing to do anything to get her daughter back.

Rachel is divorced, and it is clear that her husband is not the kind of person capable of handling this emergency. She calls on her brother-in-law, Pete, a former Marine. Pete has a drug problem and is living on the edge of society. He and Kylie are extremely close and he steps in to help Rachel. They kidnap a child and Rachel gets the phone call announcing that Kylie has been released. Over the next hours, Rachel and Pete struggle to keep the parents of the next child on task. They are finally able to release the child they are holding and believe their ordeal is over. The problem is that The Chain never completely releases anyone. Rachel, Kylie, and Pete struggle with nightmares and fears. By this point, some money has been deposited back in Rachel's bank account, making it look like she was paid for kidnapping a child. She is warned that anyone who goes to the authorities will be killed, and Rachel believes the threat is real.

As a month passes, Rachel and Kylie continue to battle nightmares. Rachel's ex-husband, Marty, begins dating a woman named Ginger, an FBI agent. Meanwhile, Rachel meets a man named Erik Lonnrott who has been doing research and believes he has some information about The Chain. Erik has created a computer program he believes can track the burner phones used by the people operating The Chain. He is murdered by an unnamed member of The Chain before he can use the software, and sets a password Rachel can guess so that she can utilize it.

The founders and operators of The Chain are twins named Ginger and Olly. They have been psychopaths since they were little, killing their little brother and their father, and allowing their mother to die in front of them without calling for help. Ginger, an FBI agent, came up with the idea for The Chain and the two have been operating it for years. They began by hiring enforcers, but over time, The Chain became self-sustaining based on the premise that a person will do anything to keep their child safe, including murder. Ginger, however, has manipulated The Chain for her own personal use, rather than being satisfied with the money they were making. She meets Marty, Rachel's ex-husband, through The Chain and uses it to manipulate people and events so that she and Marty begin a relationship.

While Marty takes Kylie away for a weekend with his new girlfriend, Rachel uses Erik's computer program and learns the location of the last phone call she received from The Chain. She is shocked when she learns that Kylie is in that house. She and Pete face down Ginger, Olly, and their grandfather, killing all three. Police initially arrest both Pete and Rachel, charging them with kidnapping. However, others who were victimized by The Chain refuse to cooperate and become advocates for Rachel and Pete, who finally brought The Chain to an end. As the novel comes to a close, Rachel and Kylie are beginning to heal, and Rachel is looking forward to the next chapter of her life.

More summaries and resources for teaching or studying The Chain.

The Chain from BookRags. (c)2022 BookRags, Inc. All rights reserved.