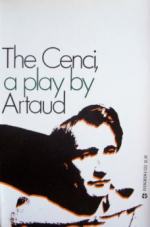 Books Like The Cenci by Antonin Artaud | Suggested Reading

The Cenci (1819), Percy Bysshe Shelley's dramatization of the tragic fate of the Cenci family, is a masterful romantic play in blank verse, which influenced Artaud's version of the story.

André Breton's 1924 Manifeste du surrealisme (Surrealist Manifesto) is the seminal work on the surrealist movement, of which Artaud was a key member until he was expelled in 1926.

Heliogabale; ou, l'anarchiste couronne (Heliogabalus; or, The Anarchist Crowned) is Artaud's 1934 historical novel about the violent Roman emperor Heliogabalus. Some critics maintain that it exemplifies the ideals of the Theatre of Cruelty more fully than does The Cenci.

Samuel Beckett's fascinating play Waiting for Godot (1953), which seems to have no dramatic conflict or plot, is perhaps the most famous example of the Theatre of the Absurd, a dramatic movement that was influenced by Artaud's Theatre of Cruelty.