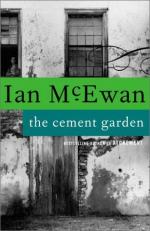 This detailed literature summary also contains Topics for Discussion and a Free Quiz on The Cement Garden by Ian McEwan.

The Cement Garden is the story of a mother and father's death and the children's dysfunctional attempts to cope with their loss. The story begins with Father, Mother, and their four children, Julie, Jack, Sue and little Tom living together. Things are well, for the most part, although Jack, the narrator, is somewhat isolated from the rest of his family, feeling distant from his father and fighting with his mother and Julie, along with harassing Tom for attention from the others.

When Father dies, Mother and the children are left alone. The family is already isolated from the rest of the community; they have few friends and no one visits the house. Mother grows sick and only the children know. She tells Julie she is going to die but the two of them hide it from Jack, Sue and Tom until it is too late for her to tell them. Jack and Julie must now take care of the family and prevent the authorities from splitting them up.

Jack and Julie decide that they cannot have a public funeral or bury Mother outside, as either would invite suspicion so Jack gets the idea to bury Mother in a trunk and fill it with cement so that no one will ever know. Julie agrees and they follow through with the plan. These events comprise the first five chapters, Part I of the book.

Part II is the story of the dysfunctional relationships and coping mechanisms the children use to deal with their problems. Tom reverts to acting like a baby after a brief stint wanting to be a girl. He acts this way to become as dependent as possible on Julie and attract all of the attention he can from her. Sue journals and reads obsessively while developing the same close emotional friendship with Julie that Julie had with Mother. Jack acts out, takes poor care of himself hygienically and becomes increasingly emotionally isolated. His attraction to Julie increases and he finds himself jealous of the other emotional bonds in the family.

Julie, however, appears the most dysfunctional. She develops a strange romantic relationship with a man much older than she is, Derek. She will not let Derek touch her but loves spending time with him and she will not connect with him emotionally or tell him about Mother. Jack is intimidated by Derek and dislikes him and Julie and Jack have conflicts about it.

However, it later becomes clear as Derek starts to poke around the house and ask probing questions about the cellar and the trunk that Julie is not as interested in him as she appears. Instead, she reciprocates Jack's attraction to her. The book climaxes as she becomes sexually intimate with Jack. When Derek walks in he is horrified and runs down to the basement to break open the concrete hiding Mother. Then he reports the family to the authorities. As the authorities arrive, Jack, Julie, Sue and Tom are all sitting on the bed, talking, for the first time, about their fond memories of Mother. Only on the last page does the dysfunction begin to end and the real grieving process begins.