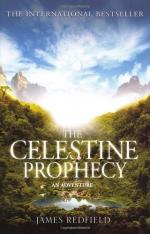 James Redfield
This Study Guide consists of approximately 44 pages of chapter summaries, quotes, character analysis, themes, and more - everything you need to sharpen your knowledge of The Celestine Prophecy.

The Celestine Prophecy: An Adventure Summary & Study Guide includes comprehensive information and analysis to help you understand the book. This study guide contains the following sections:

This detailed literature summary also contains Topics for Discussion and a Free Quiz on The Celestine Prophecy: An Adventure by James Redfield.

The Celestine Prophecy by James Redfield consists of a story that follows an unnamed middle-aged man as he travels through the Peruvian jungles in pursuit of a mysterious manuscript, slowly learning each of the manuscript's main points, or insights, from strangers he meets along the way. This is a unique novel about life and living life to its fullest.

The narrator arrives at a restaurant to have dinner with a woman he has not seen or heard from in six years, only to have her contact him that day. The woman, Charlene, is speaking to police officers as the narrator arrives because her briefcase has been stolen. Dismissing the incident, Charlene is excited to catch up with her old friend and to tell him her real reason for calling. While in Peru on business, Charlene hears of a manuscript that predicts a transformation in human society. Charlene tells the narrator that she meets a priest who tells her about the manuscript, which is divided into different insights. Charlene says that the First Insight is about how a large number of people at the turn of the century will suddenly become aware of meaningful coincidences and a larger purpose to life.

The narrator is fascinated by the idea behind this manuscript and decides to go to Peru to investigate. On the plane he meets another man, Dobson, who has also decided to go to Peru to investigate the manuscript. Dobson, who is in Peru a few weeks before and sees copies of the first two insights, explains the Second Insight to the narrator, which consists of a new awareness and perspective of history. Dobson and the narrator decide to do their investigation together, so they decide to meet at Dobson's hotel later; however, the narrator goes straight to his new acquaintance's hotel when he realizes he is being followed. The narrator arrives at Dobson's hotel just as gunfire rings out, and Dobson runs off through the streets. The narrator runs, also, unsure if Dobson is shot or arrested.

The first stop on Wil's journey is a place called Viciente Lodge, where the narrator meets a scientist, Sarah, who teaches him the Third Insight, which has to do with visualizing the energy field which exists around all living things. The narrator also briefly meets two people he will meet again, Phil and Marjorie and witnesses a fight between Sarah and a German scientist, in which each person is stealing energy from the other, a glimpse into the Fourth Insight.

When on the road again, the narrator sees a man on the side of the road, who reminds him of an old friend. Wil decides to camp behind the gas station where this man is broken down so the narrator can talk to this man. The man, Reneau, is a psychologist whose main interest is interpersonal relationships. Reneau teaches the narrator about the Fourth Insight, the stealing of energy from other people, and the narrator tells Reneau about Viciente Lodge and the fight he sees between Sarah and the German.

In jail, the narrator meets Pablo, a man who teaches him about the Seventh Insight, using his intuition to get the answers he needs. By employing this insight, the narrator foresees his escape from jail with Marjorie, who is being held in the same jail. When the two escape, they come into contact with another believer, who takes them to the home of a friend. Here the narrator meets up with a woman he met on the road, Julia. Julia teaches the narrator the Eighth Insight, relating to other people and encourages him not to become too close to Marjorie because it may impede his ability to use the insights. Marjorie returns to America.

More summaries and resources for teaching or studying The Celestine Prophecy: An Adventure.

The Celestine Prophecy: An Adventure from BookRags. (c)2022 BookRags, Inc. All rights reserved.