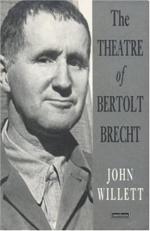 This Study Guide consists of approximately 57 pages of chapter summaries, quotes, character analysis, themes, and more - everything you need to sharpen your knowledge of The Caucasian Chalk Circle.

This detailed literature summary also contains Quotes and a Free Quiz on The Caucasian Chalk Circle by .

The following version of this book was used to create the guide: Brecht, Bertolt. The Caucasian Chalk Circle. University of of Minnesota Press, 1999.

Brecht begins his play in the Caucasus Mountains, where a gathering of farmers have come to settle a dispute over the ownership of farmland. One group, the Collective Goat Farm Rosa Luxemburg, was ordered to evacuate before Hitler’s armies arrived, while their neighbor, the Collective Fruit Farm Galinsk, wants the right to grow vineyards in the valley. The village is in ruins, but the farm collective members discussion is amicable, with very little animosity between the contenders as they continuously call each other “Comrade.” The Old Man from the Rosa Luxemburg farm argues that his collective has always occupied the valley, and that they’ve been relocated to infertile grazing land. A member of the Collective Fruit Farm Galinsk is brought forward, and she proposes an irrigation plan that would solve the Rosa Luxembourg Farm’s issue with infertile grazing land. It would additionally allow members of the Collective Fruit Farm Galinsk to settle somewhere after having fought the Nazi forces, where they lost many of the collective’s members. Seeing the benefits, the Rosa Luxemburg farm agree to the solution proposed by the Galinsk agriculturalist, and they all prepare for lunch in celebration. A singer, Arkadi, arrives to entertain the farmers after their meal, and his story becomes the parable of Brecht’s The Caucasian Chalk Circle.

The tale begins in the Kingdom of Grusinia, where a wealthy governor, Georgi Abashwili has just become a new father. It is Easter Sunday, and the royal procession heads to church, accosted on the streets by beggars and petitioners to help them in their plight. As they enter the church, one guard remains outside. The singer introduces the soldier, Simon, and Grusha enters. The two flirt playfully until she has to resume her duties as a kitchen maid. The following day there is a coup d’etat , and the Governor is marched off in chains by Ironshirts to be executed. His wife, Natalla Abashwili, more concerned with her belongings than her infant, Michael, flees forgetting her child. Simon spots Grusha in the chaos, and knowing this may be their last moment together for some while, asks her hand in marriage, and she happily accepts. As a token of remembrance, Simon gives Grusha a silver chain with a small cross, and Grusha says farewell with a romantic poem. His wife, Natalla Abashwili, more concerned with her belongings than her infant, Michael, flees in a panic, forgetting her child. One of her aides hands the child the Grusha and rushes of as well. Grusha begins to leave with other kitchen staff, but returns, unable the leave the helpless child behind. She stays overnight, and escapes with Michael in the morning.

Grusha flees the palace, child in her arms, and with the Ironshirts hot on her tail. She reaches a country house, and persuades a peasant woman to conceal the child’s origins by claiming its belongs her. However, the peasant woman breaks, and the Corporal finds the child in the crib. Grusha, in panic, cracks the Corporal over the head with a log of wood. Again, Grusha is forced to flee, and she eventually comes to a dilapidated bridge spanning a glacial crevice. Braving the peril, Grusha crosses with Michael, and the Ironshirts are unable to pursue her.

Grusha travels the glacier for seven days, and finally arrives at her brother’s house, where her welcome is tempered by the unknown origin of the child. Grusha and her brother, Lavrenti, invent a story about a husband off at war to fool Lavrenti’s wife and remain inconspicuous, but as spring comes, they need to follow through with the plan. Lavrenti makes arrangements with the mother of a dying man, so Grusha can remain faithful to Simon, and a surreal scene of both a wedding and a funeral ensues. The husband somehow recovers, and Grusha is trapped in marriage. A few seasons later, Grusha takes Michael out with some other boys to the stream, and Ironshirts arrive to take Michael back to the city, where there will be a trial on who the rightful parent of child shall be.

Azdak, the judge of the trial, is given his own scene detailing his background. The village scrivener, Azdak ends up accidentally harboring the Grand Duke on his escape from the city, and turns himself in to the soldiers. During the rebellion, the previous judge was hanged, and the Ironshirts decide to elect Azdak as judge, as opposed to trying him for his self confessed crimes. Azdak enacts an odd sense of justice, often siding with the oppressed as opposed to the oppressor, and takes bribes during the entire judicial process. As the tables turn with the Grand Duke’s return, Azdak is initially put in chains for his connection with the new government, but then pardoned for previously assisting the escape of the Grand Duke, enabling him to remain Judge for the child’s trial.

As Azdak commences the trial, he unearth’s that the Governor’s wife and lawyers are concerned about the beheaded Governor’s estate following the child, and no longer belonging to them. Grusha maintains that the child is hers, on the grounds that she raised him and fed him, but is unable to offer Azdak a bribe, as Natalla Abashwili’s lawyers have already done. Grusha becomes enraged, yelling at Azdak about his corruption of justice, and he is visibly won over by the woman’s fervor. He quickly addresses another case, a divorce case, and then returns to Grusha and the child, and proposes a test: a chalk circle is drawn in the ground, and tells the two woman that Michael’s real mother is the one who pulls him from the circle. Grusha loses multiple times, as she is not willing to risk harming Michael. Azdak decides in favor of Grusha, and signs the divorce papers for the other case, documents which he forges so that it is Grusha who is divorced from the peasant, and free now to live her life with Simon and Michael.

More summaries and resources for teaching or studying The Caucasian Chalk Circle.