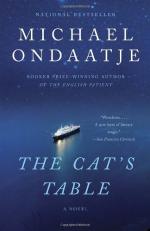 Michael Ondaatje
This Study Guide consists of approximately 38 pages of chapter summaries, quotes, character analysis, themes, and more - everything you need to sharpen your knowledge of The Cat's Table.

This detailed literature summary also contains Topics for Discussion on The Cat's Table by Michael Ondaatje.

Michael Ondaatje's 2011 novel, "The Cat's Table", is the coming-of-age tale of an ll year-old boy named Michael who takes a 21-day sea journey in the 1950s. Leaving his home on the island state of Ceylon (now called Sri Lanka), just south of India, Michael boards a passenger ship called the Oronsay bound for England, where he will be reunited with his mother. Michael's parents are divorced and have left him in the care of an uncle in Ceylon. He is traveling alone, but he meets two other Ceylonese boys who also are unaccompanied by an adult. Cassius, who was a year ahead of Michael at the same boarding school, has a reputation for trouble-making that he upholds on the Oronsay. Ramadhin is a quiet and studious boy with asthma and a weak heart, but he participates nevertheless in most of the mischief, which becomes increasingly serious as the voyage continues. Also on board is a luminous 17 year-old named Emily de Saram, who is a distant cousin of Michael. The novel is an ensemble piece, and many of its characters sit at the same table as Michael in the ship's dining room. This is the Cat's Table, so called because it is the least prestigious table in the room. Even so, its adult members prove to be among the most interesting and resourceful people on board. The story, told entirely through the eyes of Michael, often jumps years forward to the present, when he has become a well-known writer who is recalling this voyage of his youth to write a book about it.

For a good while, the novel appears to be a series of quirky and interesting character sketches of the passengers, interspersed with stories of Michael's life both before and after the voyage. Gradually, the backgrounds and the on-board activities of numerous characters begin to affect each other, and an intrigue emerges. It concerns a prisoner on board named Niemeyer, who is being brought from Ceylon to England for trial after allegedly murdering an English judge in the Ceylonese city of Colombo. Several people on board are participating in a plot to help Niemeyer escape custody, while others are engaged in efforts to ensure his arrival in England. Through a romantic attachment, Emily becomes involved in this plot, which ends in the death of a policeman and in Niemeyer jumping overboard with a young woman, his daughter, who was part of the plot to free him. The fate of the father and daughter is undetermined, although it is likely they drowned. During the journey, young Michael comes to realize that many of the people on board have secrets to conceal. After the voyage, he has a close friendship with Ramadhin, who dies at age 30 of heart failure, and he has a short-lived marriage to Ramadhin's sister. He does not see Cassius again, but years later he meets Emily, on whom he had an innocent crush during the voyage. He learns that the events on board the Oronsay left a deep mark on her soul. As for Michael, by the time his mother meets him when the ship docks, it is clear that the voyage has marked a rite of passage for him from the naiveté of childhood to a stage of awareness that precedes the entry to adulthood.

More summaries and resources for teaching or studying The Cat's Table.