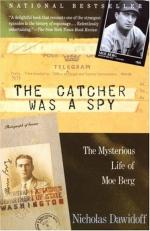 The Catcher Was a Spy: The Mysterious Life of Moe Berg Summary & Study Guide

The Catcher Was a Spy: The Mysterious Life of Moe Berg Summary & Study Guide Description

The Catcher Was a Spy: The Mysterious Life of Moe Berg Summary & Study Guide includes comprehensive information and analysis to help you understand the book. This study guide contains the following sections:

This detailed literature summary also contains Topics for Discussion and a Free Quiz on The Catcher Was a Spy: The Mysterious Life of Moe Berg by Nicholas Dawidoff.

The Catcher Was a Spy: The Mysterious Life of Moe Berg is a non-fiction work by writer Nicholas Dawidoff. In this book, Dawidoff explores the life story of Moe Berg, a highly educated lawyer who was also a professional baseball player for sixteen years before joining the OIAA and then the OSS in the aftermath of the bombing of Pearl Harbor. The Catcher Was a Spy is a true story of one man who was an enigma that many still are trying to understand today.

Moe Berg was the third child of Ukrainian immigrants, determined to fit in in their new country. Moe's father owned a laundry before training to become a pharmacist and owning his own drug store. Moe's father worked hard and disapproved of what he saw as a child's game, baseball. Despite this, Moe became a star baseball player during his years at Princeton University and later became a professional ballplayer.

Moe Berg's family was Jewish, but his father was unhappy with the stigma his religion placed on him in his new country and chose to deny his faith, even though he never changed his name or made any covert effort to disguise his birthright. Bernard Berg refused to allow Yiddish or Hebrew to be spoken in his home and refused to have his sons celebrate their bar mitzvah. For this reason, Moe and his siblings grew up being teased by schoolmates for their religion, but not celebrating or otherwise learning about it, leading to an ambiguous and often confused sense of their own heritage.

Moe played professional baseball for sixteen years. In the beginning, Moe played shortstop. Moe had the potential to be a starting shortstop for a major league team, but early in his career he chose to miss spring training camp and the first few months of the season in order to attend law school. After several years in professional baseball, Moe found himself volunteering to play catcher when the catcher on his team was injured and the manager was desperate for someone to take his place. Again Moe shone and had the potential to be a starting catcher, but he injured his knee and was unable to play at peak condition for several seasons.

Moe moved from team to team during his sixteen years as a player. In 1939, Moe was offered the position of coach for one of the teams he previously played for. Moe took this job and worked at it for three years. However, at the beginning of World War II, Moe was approached by the OIAA, the Office of Inter-American Affairs, to become an agent of propaganda for them. Eventually Moe agreed. In his first few months with the OIAA, Moe told everyone he could about the films he took in Japan while he was there teaching young Japanese people how to play baseball. Moe showed the films to several groups of people with both the OIAA and the OSS, Office of Strategic Services, the film and later would brag to his many friends and acquaintances that his film helped to plot the Doolittle Raids in 1942.

As part of the OIAA, Berg went to many countries in South and Central America in 1942 and visited airbases and other military settlements, making recommendations on how to raise morale. The leaders at OIAA often did not know where Berg was during this trip, but he was later praised for his good work. After this trip, Berg quit the OIAA, and joined the OSS.

During World War II, the American government became aware of the new nuclear technology that scientists all over the world were using to create atomic bombs, including scientists in America. This concerned the government, which became worried that another country, especially Germany, would develop the bomb first. As a result, the government assigned two separate agencies to locate the lead scientists in Germany and learn how close they were to developing the atomic bomb. Moe was part of this team. As a part of the team, Moe went to Europe and developed relationships with many physicists who had information on the progress Germany's Werner Heisenberg was making. In the end, it was Moe who was sent to a lecture Heisenberg was giving in Switzerland and determine how close he was to developing a bomb. If he thought Heisenberg was close, Moe was to kill him. However, Moe was able to determine that Germany was still years from developing the atomic bomb.

After the war, Moe receive the Medal of Freedom for his work, which he turned down. He was released from the OSS as it was disbanded and eventually became the CIA. For many years, Moe petitioned the CIA for a job and received several contracts through them, but failed to meet expectations. Late in his life, Moe became something of a vagabond, moving from place to place, living off the generosity of friends and acquaintances. In 1972, Moe became ill after a fall out of bed and hospitalized, where doctors discovered too late that Moe suffered from a ruptured abdominal aneurysm. Moe died May 29, 1972.