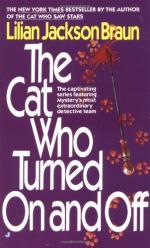 The Cat Who Turned on and Off Summary & Study Guide

Lilian Jackson Braun
This Study Guide consists of approximately 34 pages of chapter summaries, quotes, character analysis, themes, and more - everything you need to sharpen your knowledge of The Cat Who Turned on and Off.

The Cat Who Turned on and Off Summary & Study Guide Description

The Cat Who Turned on and Off Summary & Study Guide includes comprehensive information and analysis to help you understand the book. This study guide contains the following sections:

This detailed literature summary also contains Topics for Discussion and a Free Quiz on The Cat Who Turned on and Off by Lilian Jackson Braun.

This mystery novel is one of a series of stories about the exploits of newspaper reporter Jim Qwilleran and his two intuitive and troublemaking Siamese cats. As they settle into their new life in a small Midwestern town, the unusual trio of investigators is drawn into the mystery surrounding the death of a respected antiques dealer. As they draw closer to the truth, the narrative explores themes related to the inevitability of justice and the value of trust.

The novel begins with a narration of Qwilleran's journey through a rough-looking part of his new hometown, a neighborhood that his cab driver calls Junktown because of its associations with both junk/antique dealers and with drugs or "junk." At his rooming house, Qwilleran feeds the two cats, Koko and YumYum, and as a result of his interactions with them, realizes that Junktown is a possible source for a potentially lucrative newspaper article. He discusses his idea with his friend and editor, who tells him that there has recently been a mysterious death in the area. This intrigues Qwilleran even more and he begins his investigations.

No sooner does Qwilleran arrive in Junktown than he meets, and feels attracted to, the beautiful and enigmatic antique dealer Mary Duckworth, who reveals that she was involved with the murder victim, a highly respected dealer named Andrew Glanz. Shortly after meeting her, Qwilleran attends an auction, during which the contents of Glanz' shop are sold off. At the auction he meets the chatty Iris Cobb, yet another dealer in the area, who tells him she has an apartment for rent and identifies several of the other dealers in the area. After the auction, Qwilleran visits the apartment and agrees to rent it, quickly collecting the cats and the rest of his possessions and moving in that day.

Over the next few days, Qwilleran continues his investigations of the Junktown community, meeting several of the dealers and putting together a more complete picture of Glanz, of the night he was murdered, and of the community in general. In the meantime, he becomes increasingly involved with the troubled Mary Duckworth, who eventually reveals that she is not who she says she is and who has what she feels are compelling reasons for concealing her identity.

As Qwilleran's investigations continue, he uncovers several possible motives and suspects in the case. One of those suspects is Iris' husband C.C. who, Qwilleran discovers, had a confrontational relationship with Glanz and who himself, narration reveals, is eventually murdered.

As Qwilleran considers a wide range of suspects and circumstances, his attention comes to rest on a particular individual and a particular situation. The individual is eccentric dealer Ben Nicholas, and the situation is the presence of a drug dealer operating in the Junktown area. As Qwilleran draws closer to both the truth and to Mary Duckworth, Koko and YumYum bring unexpected clues and insights to Qwilleran's attention.

A narrow escape from death at an abandoned theater and witnessing Ben Nicholas' surprising generosity are among the final pieces of the puzzle that Qwilleran uncovers that eventually lead him to the strong suspicion that Nicholas is the killer. A confrontation with the dealer, along with input from Koko, confirms those suspicions and Nicholas is arrested. The book concludes with the hint that as they have discovered the situation's various truths, as well as illuminated some of their own personal ones, Qwilleran and Mary have become close enough for intimacy. This hint is reinforced by the helpful Koko's turning off of the lights.

More summaries and resources for teaching or studying The Cat Who Turned on and Off.

The Cat Who Turned on and Off from BookRags. (c)2022 BookRags, Inc. All rights reserved.