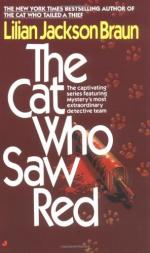 Lilian Jackson Braun
This Study Guide consists of approximately 28 pages of chapter summaries, quotes, character analysis, themes, and more - everything you need to sharpen your knowledge of The Cat Who Saw Red.

The Cat Who Saw Red Summary & Study Guide includes comprehensive information and analysis to help you understand the book. This study guide contains the following sections:

This detailed literature summary also contains Topics for Discussion and a Free Quiz on The Cat Who Saw Red by Lilian Jackson Braun.

The Cat Who Saw Red is a story about a newspaper writer who stumbles into a murder mystery that begins when he agrees to help an old girlfriend leave her jealous husband. Jim is unable to find any proof of what has happened to Joy, though he knows that what her husband, Dan, has been telling just doesn't add up in any respect. Jim is able to finally figure out what has happened but not before Dan realizes how close Jim is and attempts to kill Jim as well.

Jim Qwilleran is a newspaper reporter for the Daily Fluxion who has recently been assigned to cover the fine cuisine section of the paper. Upon his first assignment Jim finds himself at Maus Haus where he meets up with an old girl friend named Joy. Joy and her husband, who are both potters, are obviously having marital trouble. Jim looks Maus Haus over and decides to move in. After Jim moves in Joy admits that she is looking to get a divorce but can't save up enough money. Jim gives her some money and later that night Jim hears a scream.

The next day no one sees Joy. As the days continue Dan, Joy's husband, says that Joy has went to Florida, although Joy told everyone she hated Florida. Jim begins to dig into things and finds that Dan is working on a new glaze for his pottery. Dan's pottery is known to be hideous but Joy's art is very pretty and she sells much more than Dan seemingly without trying. The houseboy, William, is also looking at Dan suspiciously and soon William goes missing as well.

Dan throws a big party to show off his pottery and everyone is taken aback by how wonderful the glaze is although the people admit that the glaze would have looked much better on Joy's pieces than Dan's. That night after the party Jim accuses Dan of being a liar and explains about several lies that he has caught Dan in. Dan has a quick answer for everything and Jim can't pin anything on Dan. That night Dan sneaks into Jim's room with the intention of killing him but trips on an intricate pattern of yarn that Jim's highly intelligent cat, Koko, has spun through the room.

Jim explains to the others living in the house that Dan had killed Joy's cat and used the ashes to make a wonderful looking glaze. When Joy threatened to leave Dan had killed joy and used her body the same way he had used the cat. When William go too close Dan had killed him and intended to put him in the kiln as well but there were pots in there and Dan had to store the body until later. It was William's body that got Dan in trouble since there was nothing left of Joy's body in the kiln.

More summaries and resources for teaching or studying The Cat Who Saw Red.

The Cat Who Saw Red from BookRags. (c)2022 BookRags, Inc. All rights reserved.