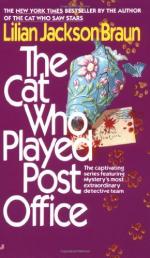 Lilian Jackson Braun
This Study Guide consists of approximately 37 pages of chapter summaries, quotes, character analysis, themes, and more - everything you need to sharpen your knowledge of The Cat Who Played Post Office.

This detailed literature summary also contains Topics for Discussion on The Cat Who Played Post Office by Lilian Jackson Braun.

"The Cat Who Played Post Office" by Lilian Jackson Braun is a murder mystery in which Jim Qwilleran investigates the disappearance of Daisy Mull with the assistance of Koko, his cat. Jim Qwilleran moves to Pickax in Moose County as prescribed in the will, when he inherits the Klingenschoen fortune. Although he intends to use the time to write in solitude, he becomes engrossed in investigating the disappearance of Daisy Mull, a former domestic at the Klingenschoen mansion. The murals that she painted in her apartment fascinates Qwill. With his cat's uncanny ability to sniff out clues, Qwill manages to uncover the truth of the girl's disappearance, despite the deaths of people who are able to assist with his investigation and several attempts on his own life. "The Cat Who Played Post Office" is a very interesting and entertaining novel that most readers will find immensely enjoyable.

Jim Qwilleran wakes up in the hospital with no recollection of who or where he is. Arch Riker, Qwill's close friend, reminds him of his past with the exception of the time immediately surrounding his bike accident on Ittibittiwassee Road, however Qwill is able to recall this time period through dreams. When Qwill inherits the Klingenschoen fortune, he moves to Pickax as the will dictates lest he forfeit the inheritance. He meets with the attorneys of the estate, Alex and Penelope Goodwinter, to discuss financial matters, the need for a housekeeper, maintenance for the mansion, and the establishment of a fund to distribute the surplus income within Moose County.

When Qwill becomes fascinated with the murals of daisies in the servant's apartment above the garage, he begins investigating the disappearance of Daisy Mull, the domestic who painted them. Koko assists Qwill in discovering many clues, including a diary and suitcases left by the girl. When Qwill intends to speak with Della Mull, Daisy's mother, the woman is found dead of an overdose, and likewise, Tiffany Trotter is killed before Qwill can speak to her. Qwill is hospitalized after a truck attempts to run over him during a bike ride on Ittibittiwassee Road. He believes it is an attempt on his life by the New Jersey family who will inherit the Klingenschoen estate if he fails to live in Moose County for five years.

After Penelope Goodwinter commits suicide, Qwill receives a letter from her explaining her part in Daisy Mull's disappearance which results from Alex impregnating the girl. The whole mystery is solved when Birch Trevelyan is arrested after breaking into the Klingenschoen mansion to permanently silence Qwill. Qwill admits that Koko is smarter than him and was the one to find the clues which lead to the truth about Daisy Mull's mysterious disappearance.

More summaries and resources for teaching or studying The Cat Who Played Post Office.