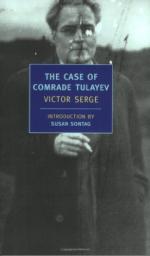 The Case of Comrade Tulayev Themes

Sacrifice for a Greater Good

Most of the main characters who are accused of being part of the fictional plot to kill Comrade Tulayev are sacrificed in one way or another to the Party line. None of these individuals is without fault, but they are ultimately very loyal to the Party and have given much of their lives to build the machine. Yet, they are consumed by the very machine that they helped to build.

Some of the main characters go willingly, while others go kicking and screaming to their fate. There is a certain hopelessness in their cause. They are willing to give up their own lives for the greater good of their country, but will their deaths make a difference? Or are they contributing to the lies and corruption by admitting to crimes they did not commit?

Erchov and Ricciotti speak openly that they no longer believe...