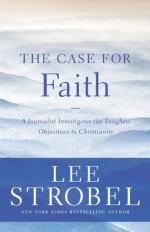 The Case For Faith Summary & Study Guide includes comprehensive information and analysis to help you understand the book. This study guide contains the following sections:

This detailed literature summary also contains Topics for Discussion on The Case For Faith by Lee Strobel.

The Case for Faith, a nonfiction book, shares the investigation conducted by Lee Strobel into faith and the objections raised to faith. Strobel, a former atheist-turned-Christian, is no stranger to the objections he investigates now as a believer. The book's main focus is on Christianity.

Strobel begins his book by looking at the dual lives and friendship of famed evangelist Reverend William “Billy” Graham and evangelist-turned-agnostic, Charles Templeton. Graham remains a committed Christian through his old age, However, Templeton fell away from the faith after being overcome by doubts about God and faith itself when he saw a photograph of a mother holding her dead child in a drought-stricken area of Africa. Templeton could not equate a loving God with such a situation. Therefore, he left Christianity. Gathering together eight common objections to faith and Christianity, Strobel interviews a number of leading Christian figures to address them.

The objections against religion include these questions:

How can a loving God exist in the midst of evil and suffering? How can miracles be true if science contradicts them? Why is God needed if evolution occurred? How could God be worthy of worship if he allows the killing of children and innocents? How could a loving God torture people in Hell?

Other objections to Christianity are that it is offensive to say that Jesus is the only way to God and that Christian history is full of violence and oppression. Also, if one has doubts, that person cannot be a Christian. By interviewing Christian figures ranging from Peter John Kreeft to John D. Woodbridge to William Lane Craig, Strobel assembles the evidence for the support of faith, God, Christ, and Christianity.

Strobel lays out the arguments through interviews with these figures one by one. Evil and suffering exist not because of God, but because of man using his free will, or choosing not to render help when needed. Miracles do not contradict science because they occur by God’s hand within the realm of nature. The people killed in the Bible through acts of God were not innocent, but truly terrible people who had rejected repeated attempts made by God to get them to change their lives before it was too late. Otherwise, those people would have committed genocide against the Israelites. Hell is real, and it is a place of suffering. However, it is not brought on by God. People end up in Hell through their own choice of rejecting God. Violence committed in the name of Christianity is not Christianity itself. It does not negate the teachings or example of Christ. True believers have their doubts, and doubts are only natural. One can believe in God and ask God to help one with his or her unbelief as well as his or her belief. Strobel’s investigation touches on many more important points as well, such as redemption, forgiveness, and salvation, and the good that Christianity has done for the world.

Strobel learns that he must be willing to weigh all the evidence for and against Christianity, rather than merely focusing on a few pieces here and there. Strobel concludes that Christianity is not marred by the eight objections investigated. Strobel ends his book on a positive note: Graham has visited Templeton, dying of Alzheimer’s, and has prayed with him and for him. Strobel decides to mail his manuscript to Templeton in the hopes that the book will help to put Templeton’s mind at ease and bring him back to Christ.

The Case For Faith from BookRags. (c)2022 BookRags, Inc. All rights reserved.