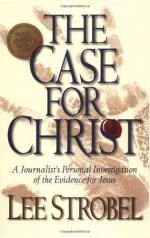 Lee Strobel
This Study Guide consists of approximately 41 pages of chapter summaries, quotes, character analysis, themes, and more - everything you need to sharpen your knowledge of The Case for Christ.

The Case for Christ Summary & Study Guide includes comprehensive information and analysis to help you understand the book. This study guide contains the following sections:

This detailed literature summary also contains Topics for Discussion and a Free Quiz on The Case for Christ by Lee Strobel.

The Case For Christ is written with a touch of wit and elements of a fast-paced fictional thriller, along with the exacting detail of an investigative scholar-reporter. Lee Strobel chronicles his 2-month spiritual journey as he seeks to learn the truth about the case for Christ. He pulls in rich, relevant detail from his crime reporting background to lay the foundation of how a case is presented in court and builds from there with pertinent historical proofs and interviews with thirteen highly-qualified experts to understand how the court systems work and how evidence is used to make a case. With his investigative reporter background, Stroble searches for truth based on historical evidence. In fact, "evidence" is an overall theme that runs the course of the book and supports the other general themes: a "case for Christ" and "reliability of the bible." Strobel handles the information as if addressing a jury and asks direct questions of his expert witnesses such as: how reliable is the New Testament? Evidence admitted addresses both sides of every issue and is presented in a way that allows readers to draw their own conclusions as if they are the jury determining the verdict.

While living life as a highly successful investigative reporter for the Chicago Tribune, Stobel's life changes when his wife becomes a Christian. He fears he will lose the fun-loving companion and friend he has known for years, but instead he is mildly surprised by subtle changes in her character. This not only intrigues him but prompts him to learn more about the Jesus of the Bible using the same logical and factual approach followed in a courtroom. He challenges readers to take an active role in weighing the evidence as members of the jury. All preconceived notions are to be set aside and the evidence presented is to be considered thoughtfully. Can a case for Christ be made beyond a reasonable doubt? His skills in investigative reporting help uncover the truth regarding the reliability of the gospels based on evidence that stands the test of time.

Strobel's approach is balanced. He not only presents evidence supporting the reliability of the gospels, but he also enters evidence that tries to disprove or color the accuracy of the bibliographical details found in Matthew, Mark, Luke and John. He questions experts regarding all the evidence, extruding conclusions based on facts. As he concludes each interview, one question he asks of his experts is what difference their research has made in their own personal faith. Across the board, researching the historical accuracy of the gospels and New Testament has strengthened their faith. This is another factor taken into consideration in the deliberation process because personal experiential testimony holds credence along with other evidence presented.

Following the standard courtroom pattern, Strobel concludes the book with a closing argument. At the end of his 21-month long search, he sits at his desk and writes out his questions and the evidence he has collected. It brings him to a point where he not only has to accept the proofs intellectually, but it is time to cross the line to receive Jesus experientially. He lists his insights as if it is a closing argument, and turns to his jury and asks them to come to a verdict based on the facts. He even takes it a step further and tells them to write down any unanswered questions they may have, to seek out experts of their own, and to do the work necessary to come to reach a verdict.

More summaries and resources for teaching or studying The Case for Christ.

The Case for Christ from BookRags. (c)2022 BookRags, Inc. All rights reserved.