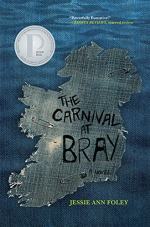 Jessie Ann Foley
This Study Guide consists of approximately 43 pages of chapter summaries, quotes, character analysis, themes, and more - everything you need to sharpen your knowledge of The Carnival at Bray.

The Carnival at Bray Summary & Study Guide includes comprehensive information and analysis to help you understand the book. This study guide contains the following sections:

This detailed literature summary also contains Quotes and a Free Quiz on The Carnival at Bray by Jessie Ann Foley.

The Carnival at Bray is a young adult novel by Jessie Ann Foley. The story follows the experiences of Maggie Lynch, a sixteen year-old girl from Chicago. Maggie, her younger sister Ronnie, and their mother Laura move from Chicago to Ireland after Laura marries Colm Byrne. Byrne is returning to his native country to help his brother manage the family construction business. As a young teen, Maggie is not thrilled with the move because she doesn't feel like she fits in with the other kids. To make matters worse, the family is somewhat isolated since they live on the outskirts of Bray.

Maggie is not only struggling with her new life in a foreign country, but she is having problems with her family, too. It's apparent that her stepfather is unaccustomed to dealing with kids. Maggie's mother acts ten years younger than her real age, and Maggie’s Uncle Kevin, a rocker with whom she has always been especially close, has taken to using heavy drugs back in Chicago. Indeed, Maggie's life is undergoing dramatic changes.

Having made no new friends her own age, Maggie befriends the elderly men who live nearby, including ninety-nine year-old Dan Sean O’ Callaghan. Dan Sean becomes a grandfatherly figure in her life, a source of sage advice. They spend hours conversing. One night after spending time talking with Dan Sean, Maggie gets lost on her way home. By chance, she meets Eoin Brennan, a seventeen year-old local who helps direct her home. She falls for him instantly. However, Maggie's difficulties at home and adjusting to Ireland cause her to reach out for the first boy she can find. This happens to be Paul, who convinces Maggie to perform oral sex on him. It is not a good experience at all for Maggie.

Christmas arrives and Maggie’s grandmother and Uncle Kevin come to Ireland for the holidays. After learning about Maggie's interest in Eoin, Kevin finds out that Eoin is single. Maggie is excited over Kevin's news; however, another event greatly upsets her. At a local pub's Christmas party, Maggie’s mother has too much to drink and stumbles around singing “Dancing Queen.” When Laura is confronted by Kevin over her display, Colm comes to her defense. The heated argument leads to Colm and Kevin coming to blows. Maggie's Uncle Kevin decides to leave for Chicago that night. Though upset, Maggie does her best to enjoy the holidays. The highlight comes when she and Eoin end up kissing on New Year’s. Though it is not her first kiss, it is her favorite.

Maggie's joy over sharing a kiss with Eoin is short-lived. On New Year’s Day, the family learns that Kevin has died. A month and-a-half later, Maggie finds a package addressed to her from Kevin. It contains a letter explaining that he committed suicide because he just couldn’t get his life together. The package also contains two tickets to an upcoming concert in Rome for Nirvana.

Maggie and Eoin run away together to Rome to see the concert. They enjoy the show and later tour Rome. Back at their hotel room, they confess their love to one another and end up having sex. It is a wonderful night for both of them. The next morning, things go downhill. Maggie’s mother, Colm, and the police arrive to bring Maggie and Eoin back. Though Maggie will not be expelled from school, she is forbidden from seeing Eoin again. Eoin refuses to make the same deal, and he is expelled. Maggie feels as if she has betrayed Eoin; so, she asks Dan Sean for advice. Dan Sean advises her to write Eoin a short, honest letter, which she does. The letter asks for a meeting with Eoin in Dublin outside of Nirvana’s concert there. Eoin agrees to the meeting. He holds nothing against her.

As the novel draws to a close, Maggie's mother returns to Chicago with Ronnie because she and Colm Byrne have divorced. Maggie, however, remains in Ireland, finishing up her last year at school. Her school had been paid for by Dan Sean before his death at the age of 101. Maggie has decided to stay on in Ireland with Eoin as the novel ends.

More summaries and resources for teaching or studying The Carnival at Bray.

The Carnival at Bray from BookRags. (c)2022 BookRags, Inc. All rights reserved.