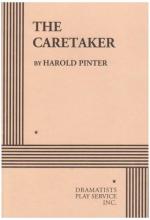 Harold Pinter
This Study Guide consists of approximately 28 pages of chapter summaries, quotes, character analysis, themes, and more - everything you need to sharpen your knowledge of The Caretaker and the Dumb Waiter; Two Plays.

The Caretaker and the Dumb Waiter; Two Plays Summary & Study Guide includes comprehensive information and analysis to help you understand the book. This study guide contains the following sections:

This detailed literature summary also contains Topics for Discussion and a Free Quiz on The Caretaker and the Dumb Waiter; Two Plays by Harold Pinter.

The play, "The Caretaker," opens with Aston bringing home to his apartment a homeless man named Davies. Aston had rescued Davies from a fist-fight with a former co-worker, which the elderly Davies was losing. Although Davies is an unemployed and homeless man, he displays bravado and brags about his abilities and good character. Aston, who is busying himself with repairing some items in the apartment, all but ignores the talkative stranger. The kind Aston invites Davies to stay until he can sort himself out. Two things are holding Davies back from seeking employment—he needs new shoes so he can walk to Sidcup and retrieve his documents and references; and, he needs a break in the weather so he can make the trip. Unfortunately, Davies is never able to realize both these requirements at the same time.

Mick catches Davies rummaging through Aston's belongings and accuses him of being a thief. Mick is the actual owner of the apartment building, which is operated by his older brother, Aston. After a tussle and some clarifications, Mick begins to negotiate with Davies on a room rental. When Aston returns, he brings Davies a pair of shoes which Davies finds inadequate for his purposes. Aston, perhaps feeling sympathy for the old man's lot, offers him the job of caretaker of the building. The very next day, Mick returns and ironically offers Davies the same position—that of caretaker. Even though Davies is honest for once and tells each brother that he'd never done that type of work before, they both seem to want him to stay around. Aston reveals to Davies that he had suffered from serious mental problems in the past.

Davies' attempts to play one brother against the other backfire. When Mick complains about Aston being lazy, Davies picks up the reins and elevates the rhetoric by calling Aston "nutty." In a quick turnabout, Mick resents Davies' characterization of his brother and zealously defends him. In the end, the two brothers who did not seem close throughout the episode are drawn closer by the interloper's interference. Rejected by Mick, Davies pleads with Aston to hire him as the caretaker. Aston ignores him and does not respond.

In the play, "The Dumbwaiter," Ben and Gus are two criminals who are awaiting instructions for their next assignment. They have loaded revolvers and make allusions to the nefarious business of assassination. Gus is the less intelligent of the two and is constantly prattling on about past assignments, their boss, Wilson, and about what job they will be given that evening. While Ben is cold and calculating about their past jobs, Gus displays remorse about their latest victim, a female. Ben, who is the leader of the two, tries to ignore the inane comments and questions of his partner. Throughout the majority of the play, Ben is reading the paper—mostly in an attempt to ignore Gus.

A dumbwaiter located between their two beds suddenly comes to life. It begins sending down a variety of food orders—for steak and pudding; for Greek dishes; and for Chinese dishes. Ben and Gus theorize that the apartment they are in must have been the kitchen of a restaurant at one time but offer no rationale as to why the system was suddenly reactivated at this time. The men, of course, have no means of making these orders but send up a plate full of some snacks they have on hand. The men are anxiously awaiting instructions for their next assignment from Wilson, but there is still no word. Ben notices a speaking tube hanging on the wall next to the dumbwaiter. He has several exchanges with someone up the hatch. Gus leaves the room for a short time then returns to find Ben with his revolver drawn and leveled at him. Ben had received the night's assignment.

More summaries and resources for teaching or studying The Caretaker and the Dumb Waiter; Two Plays.

The Caretaker and the Dumb Waiter; Two Plays from BookRags. (c)2022 BookRags, Inc. All rights reserved.