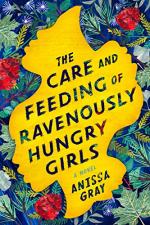 Anissa Gray
This Study Guide consists of approximately 51 pages of chapter summaries, quotes, character analysis, themes, and more - everything you need to sharpen your knowledge of The Care and Feeding of Ravenously Hungry Girls.

The Care and Feeding of Ravenously Hungry Girls Summary & Study Guide includes comprehensive information and analysis to help you understand the book. This study guide contains the following sections:

This detailed literature summary also contains Quotes and a Free Quiz on The Care and Feeding of Ravenously Hungry Girls by Anissa Gray.

The following version of this book was used to create this study guide: Gray, Anissa. The Care and Feeding of Ravenously Hungry Girls. New York: Berkley, 2019.

Althea Butler-Cochran and her husband Proctor were pillars of the community in New River Junction, Michigan, until it was discovered that they were stealing charitable funds raised in their restaurant to help individuals affected by a recent flood. Now, Althea sits in her jail cell awaiting her sentencing hearing. She thinks back to her youth. Althea's mother died when she was 12, and she met Proctor at the funeral. Althea spent her teenage years looking after her younger siblings, Viola, Joe, and Lillian, because their father was a traveling evangelist. She married Proctor when she was 18.

Lillian now has custody of Althea and Proctor's twin daughters, Baby Vi and Kim. Lillian and Baby Vi attend the Butler-Cochrans' sentencing hearing, but Kim (who actually called the police and reported her parents) is struggling emotionally with this situation, and is absent. Lillian lives in her childhood home, which was bequeathed to her by her father, along with the grandmother of her ex-husband Sam (now deceased), and the twins. Viola sets out for New River Junction from Chicago, where she lives. She has recently separated from her wife, Eva. On the way to Michigan, she stops at a motel, binges on junk food, and vomits. In prison Bible study, run by an inmate named Mercedes, Althea feels like her identity is slipping away from her.

Viola arrives in New River Junction and goes to Althea and Proctor's restaurant to meet her childhood friend David. He helps her remove a piece of the restaurant's bar, which Viola thinks Proctor would like as a keepsake. Back at the Butlers' childhood home, Lillian overhears Viola telling Eva she has been in town for days already, and she wonders about this time gap. Lillian obsessively checks each door in her house to make sure all of the inhabitants are safe. She is unhappy that her brother Joe is staying with her. Joe abused Lillian when they were teenagers, and Viola has always felt guilty about leaving Lillian alone with him when she went to college. Joe tells his sisters he wants the twins to live with him.

Althea reads two letters, one from Proctor begging her to let the twins come and visit her, and one from Kim to Proctor, in which she complained about the fact that her mother was overly critical of her and always preferred Baby Vi. Viola takes the twins bowling, but during the outing they are confronted by angry fellow patrons who had donated money to the charitable fund at the restaurant. Later that night, Baby Vi tells Viola and Lillian that Kim is gone. They drive around looking for her, but do not find her. Lillian tells Viola that she should tell Althea about the way Joe treated her when they were teenagers. At the jail, Lillian does tell Althea, but Althea dismisses her. The restaurant burns down, and Viola and Lillian believe Kim is responsible. They do not tell Althea that Kim is missing, but Proctor does, in a letter, and asserts that it is her fault for not being kinder to her daughter.

Althea calls Viola and expresses her guilt about Kim and about not being supportive with Lillian. Viola returns to Chicago briefly and visits Eva, asking what she can do to make things right between them. Althea's prison friend Mercedes gives her a soap sculpture of Saint Joseph, patron saint of travelers and families. Viola confronts Joe about abusing Lillian, and he apologizes, but not particularly sincerely. Baby Vi tells Lillian she has received a text from Kim, and that she is worried she might do something drastic. Lillian calls Joe and confronts him herself, recalling how he used to lock her in a closet for days at a time. Joe admits that he was jealous because their father came home to raise her and never paid any attention to Joe. Lillian tells Joe he is no longer welcome in her house. She then receives a call from a strange woman stating that she is with Kim at Althea and Proctor's house.

Lillian rushes to the house, and finds Kim and the strange woman standing out back on the dock that overlooks the Saint Joseph River. Kim jumps in the water, and Lillian and the woman follow, eventually wrestling her to the shore. In the hospital, when Kim wakes up, Viola tells her that she wants the twins to come live with her in Chicago.

Back at home, Lillian is visited by the strange woman, who introduces herself as Mercedes, stating that Althea gave her permission to stay at her house. Lillian invites Mercedes in. In the novel's final section, Lillian sells her childhood home and moves to New York City with Nai Nai, who advises her to forgive herself for cheating on her husband long ago. Althea and Proctor are remanded to the prisons where they will serve out their term, and continue to exchange letters. Althea vows to keep working on herself. Viola takes the twins to Chicago to live with her and Eva. They attend group therapy for their issues and talk to Althea on the phone. Kim and Althea are working towards a reconciliation.

More summaries and resources for teaching or studying The Care and Feeding of Ravenously Hungry Girls.

The Care and Feeding of Ravenously Hungry Girls from BookRags. (c)2022 BookRags, Inc. All rights reserved.