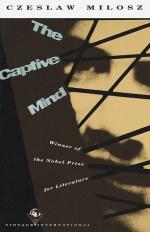 Czesław Miłosz
This Study Guide consists of approximately 24 pages of chapter summaries, quotes, character analysis, themes, and more - everything you need to sharpen your knowledge of The Captive Mind.

This detailed literature summary also contains Topics for Discussion and a Free Quiz on The Captive Mind by Czesław Miłosz.

The Captive Mind by Czeslaw Milosz discusses life in the Eastern European countries during the years of Stalinism. The book was written during this era and earned the author a Nobel Prize for Literature. The author lived and wrote in Poland during the years of the Nazi occupation and then under the socialist regime. He became a supporter of socialism since he did not want to go into exile. Milosz watched as his own philosophical views were replaced by those of the Soviet regime until he could no longer tolerate the situation and broke with the regime. He could no longer tolerate the doctrine which was forced on him. In a sense, he obtained his freedom when he rejected the doctrine.

Milosz's purpose in writing the book is to explain how the mind functions in a socialist society. For example, the individual basically sells out to the State in order to survive. He follows the prescribed method even if it is under the facade of Ketman, which is the practice of hiding one's true beliefs. The writer can no longer be creative. The writer must portray the class struggle in a manner that is acceptable to the Party. If not, the individual will not find work. The individual that cannot accept the doctrine is branded as a reactionary and an enemy of the people.

Milosz uses four writers as examples of writers that were active at the time the people's democracies came into being. Alpha is described as the Moralist, Beta is the Disappointed Lover, Gamma is the Slave of History and Delta is the Troubadour. The author, who knew these people, describes their careers and what kind of adjustment each made to be a writer in the people's democracies. Adherence to the Method stifles creativity as it did in each of these authors. Some made the adjustment and were successful. One did not and was basically out of favor with the regime. Milosz relates the kind of internal conflict the writer undergoes in adapting to the Method and how it is reflected in their writing.

Milosz relates what happens to a nation when socialism is imposed. He not only talks about Poland but also about the Baltic States. The country that is taken over must be made to conform to the Soviet model, which involves deportation of thousands to labor camps, collectivization of agriculture and the organization of labor.

The author does a good job in portraying life under socialism. The book, although short in length, is rather slow reading in that the reader needs to think of the implications of what the author is saying. Some familiarity with Marxian terminology is also helpful. The book is well worth the time spent reading it, especially for those with an interest in the Soviet bloc countries and life under socialism.

More summaries and resources for teaching or studying The Captive Mind.