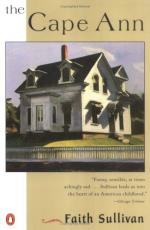 This detailed literature summary also contains Topics for Discussion and a Free Quiz on The Cape Ann by Faith Sullivan.

Papa, Mama and six-year-old Lark Ann Browning Erhardt sit down to dinner one evening and Mama opens the discussion of their plans to build a home. Papa Willie seems to have no interest in building a home. Mama Arlene and Lark would like a bigger home that offers Lark her own room. Lark is simply too old to be sleeping in her infant crib. Papa and Mama argue violently over who will get to go out for the evening and who will take care of securing a babysitter for Lark. Mama is upset because she feels Papa thinks her plans are always a joke.

Lark glances through the house booklets that Mama brought home and she chooses a design—#127—The Cape Ann. Papa never calls a sitter and takes Lark with him to the poker game. He brings her home at 5:30 the next morning to a livid Mama. Lark's parents have another violent fight when Arlene learns that Willie loses two hundred of the five hundred dollars they saved for a home. Papa thinks Mama breaks his ribs with the Heinz ketchup bottle.

Lark uses her imagination to escape inside the scenery of the banjo clock. The next day, Mama checks the classified ads for a job and she orders a typewriter. She and her daughter engage in a role-playing game called "Lady Caller" and Lark is able to talk about her concerns, worries and fears. Another way Lark deals with the complexities of her childhood is by making lists. Religion is a source of continual worry for Lark and she makes her sin list, so that she will not forget any of her many sins when the time comes for her First Confession at St. Boniface Catholic Church.

When Papa sees Lark's ragged fingernails, he spanks her with a brush. Each time he does this, he feels guilty. The first time, he takes Lark to go with him to catch night crawler worms for a fishing trip.

At the Knights of Columbus Memorial Day Picnic and Parade, Beverly Ridza befriends Lark and teaches her how to swim. Soon after, Lark and her Mama travel to Arlene's sister's house to help with Aunt Betty's very difficult pregnancy. Lark meets a magical woman named Maria Zelena, who has medical potions, and who saves her Aunt Betty's life. Maria cannot save the baby, however. Baby Marjorie dies. Lark feels guilty and takes the blame, internally, for not catching the infant when the stork drops her.

After the baby's funeral, Papa and Uncle Stan play poker. Papa loses four hundred and fifty dollars. He later sells their Oldsmobile to pay off the debt. Mama makes plans for Betty and Stan to get back on their feet financially. She sends Stan to California and Betty to their mother and father's in Blue Lake.

Lark does not bite her nails while away from her father and Mama tells Lark she can buy a bottle of nail polish to paint them. It is soon time to go back to school. Lark will enter the second grade.

Soon after, Hilly seems to be regaining his sanity, but the Erhardt ladies see a profound sadness about their usually jolly friend who came back from the World War mentally wounded, yet a hero nevertheless. Lark studies catechism each week with her friends and she experiences her First Confession and First Communion.

Mama wins grand prize at the Majestic Movie Theater, buys a car and opens a typing service. She saves money for the down payment on their new home. Mama is very resourceful, a hard worker and quite independent.

Lark and Mama then visit the Brownings' home, where Aunt Betty is staying. Aunt Betty comes home from a shopping trip hemorrhaging and the incident is kept secret. Mama brings Aunt Betty home to Harvester with her and Lark.

The second World War breaks out and Hilly is so devastated that he commits suicide by shooting himself in the mouth. Lark decides she will not go to the church anymore because the priest refuses to bury Hilly. He says that suicide is a mortal sin. Lark refuses to believe her friend Hilly is in hell. Rather, she thinks Hilly went to heaven.

As the family gets nearer to the time when they will build, Papa loses another five hundred dollars in poker. Mama tells Papa she is leaving for California with Aunt Betty and Lark, for good. The ladies go back to the Brownings to say their final goodbyes. When the ladies get on the last train, the one headed for California, Papa appears at the depot to tell them he wants them to come home. They head on to California.