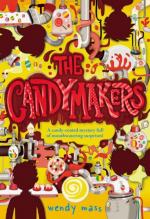 Related Topics
Every Soul a Star
A Mango-Shaped Space

Wendy Mass
This Study Guide consists of approximately 41 pages of chapter summaries, quotes, character analysis, themes, and more - everything you need to sharpen your knowledge of The Candymakers.

The Candymakers Summary & Study Guide includes comprehensive information and analysis to help you understand the book. This study guide contains the following sections:

This detailed literature summary also contains Quotes and a Free Quiz on The Candymakers by Wendy Mass.

“The Candymakers” is a young adult mystery novel by Wendy Mass which follows the efforts of Logan, Daisy, Miles, and Philip at a candy factory to create the perfect candy and win a contest, and to avert the theft of a secret ingredient. As the novel opens, Logan, Daisy, Miles, and Philip have all been selected as winners of an essay contest in Region III of the United States to participate in the Confectionary Association’s annual new candy contest. Each of the kids will be given a crash-course in candymaking at Life is Sweet Candy Factory, from which they will create their own new candy. The winner will not only receive $1,000, but their candy will be put into mass production and distribution.

Logan himself is the child of the owners of the Life is Sweet Candy Company, though he has not inherited the natural candymaking talents of his parents and grandparents. Logan’s selection for the contest means he has the chance to prove he is as good as his father and grandfather. Miles’s entry into the contest has to do with seeing a young girl drown the year before, plunging him into reading and learning, especially about the afterlife. His entry into the contest is in honor of that girl. Daisy is a spy, part of a family of spies that hire themselves out to various customers and groups. Daisy has been tasked with stealing the secret ingredient from Life is Sweet for the client Second Enterprises. Philip, a rich and wealthy kid, has entered the contest to seek revenge against Logan for a childhood accident where Logan dropped Philip’s toy truck into a vat of chocolate, leading to Philip being banned from the factory.

Logan, Miles, and Daisy immediately get along well. Philip remains distant, plotting revenge. All three kids are stunned, however, by the fact that Logan’s face and arms are so heavily scarred, but no one asks about them. As time passes, Daisy begins to question the morality of her current job. She sees how happy and passionate the Life is Sweet employees are about making candy, and wonders why Second Enterprises would want to take that away. She plans to add soap to the secret ingredient so that when backup agents steal the ingredient, it will backfire on them.

Miles comes to discover that Daisy is the girl he thought had drowned the year before – but she was only carrying on with physical training by staying underwater so long. Miles quickly becomes especially good friends with Logan. While the two are camping out in the factory at night, they discover Daisy and Philip with the secret ingredient. Philip confesses that he had originally been seeking revenge, but that he came to discover he was never banned from the factory. His father had made it up as part of plot to ruin Life is Sweet’s finances in order to buy out the company and make a windfall profit. Philip has never been very close with his father. Philip explains his goal is to prevent his father from taking over Life is Sweet which is why he himself was trying to steal the ingredient, to keep it safe. He also reveals a bet with his father: If Philip can win the contest, his father will not try to take over the company.

Logan, Daisy, Miles, and Philip all agree to work together on one candy in order to win the contest. They pursue Philip’s idea of a candy harmonica that actually plays –the Harmonicandy. Logan comes to realize that he, like the others, has entered the contest for the wrong reason. He didn’t enter the contest out of love of his art form, but the desire to prove himself. He is now personally invested in making a wonderful candy out of passion – and to save the company. At the convention, the Harmonicandy takes first prize.

Logan’s father then reveals the secret ingredient to Logan, Daisy, Miles, and Philip. The tin in which it is kept is empty with a mirrored bottom, showing the reflections of the four kids. The secret ingredient, it is revealed, are the people who make the candy, and the love that goes into the candy. Daisy decides to take time off from spying. Logan ultimately reveals his scars were a result of his falling into a vat of boiling chocolate to attempt to save Philip’s toy truck years before. Logan and Philip then become good friends with each other, and everyone else.

More summaries and resources for teaching or studying The Candymakers.

The Candymakers from BookRags. (c)2022 BookRags, Inc. All rights reserved.