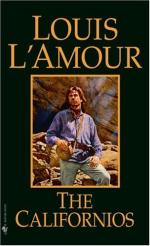 Eileen Mulkerin is the protagonist in the story. Eileen was born in Ireland and moved to France as a young woman. From France the family moved to Spain. In Spain Eileen's father was killed because he was a part of a plot to overthrow the British government. Eileen was sent to Mexico to live with an aunt and uncle.

Once in Mexico Eileen met and married Colonel Jaime Mulkerin. Mulkerin was a Colonel in the Mexican Army and who gained favor with the Presidente. The Presidente granted Jaime and Eileen a plot of land in Malibu. The land became the family farm.

Eileen became the matriarch after Jaime died. She is highly respected by all around her. Known as a capable, strong, practical woman, it is clear that Eileen can take care of her own. Eileen fights against the stereotypes of woman with people like Wooston who...