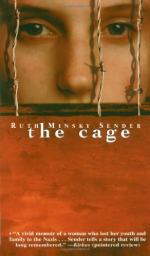 Get The Cage from Amazon.com
View the Study Pack
View the Lesson Plans
Study Guide
Order our The Cage Study Guide

Ruth Minsky Sender
This Study Guide consists of approximately 26 pages of chapter summaries, quotes, character analysis, themes, and more - everything you need to sharpen your knowledge of The Cage.

The Cage Summary & Study Guide includes comprehensive information and analysis to help you understand the book. This study guide contains the following sections:

This detailed literature summary also contains Topics for Discussion and a Free Quiz on The Cage by Ruth Minsky Sender.

As the story opened, Riva Minska was talking with her daughter, Nancy. She said that her days were filled with sunshine but her nights were filled with nightmares. During the day she was safe, but at night she dreaded the images brought by sleep. Her daughter, Nancy, came to Riva and seemed sad. When Riva questioned her, she revealed that she regretted that she hadn't grandparents to care for her. Riva assured her daughter that the horror of the German slaughter of Jews couldn't happen again. She then thought back to 1939 when she was thirteen. Her life was happy with her mother and six siblings. Her mother, Nacha, decided to send the three older of the children out of the country. Nacha believed that the Germans would not harm women and children.

Over the coming months, the situation deteriorated. Riva and a cousin were on an errand to the post office one day when Germans gathered all the Jews they could find and forced them to run in circles. They then separated the men, deporting them and leaving the neighborhood in shambles. Riva's childhood friend joined the Nazi party and appeared one day at her door wearing the uniform, swearing he could help protect Riva but later standing by as the possessions of Riva's family were stripped away. Riva's youngest brother, Laibele, was soon ill with tuberculosis, and the rest of the family was forced to work. There was constant fear that the Germans would take Laibele away as had become the habit when dealing with the sick and the old. They hid Laibele from German searches, but one day the Germans took Nacha away, leaving the four children on their own.

Eventually the little family came to the attention of officials and they were to be split up and offered for adoption. Riva argued, but they knew they were powerless and waited for the inevitable. Instead, Riva was granted custody of her brothers in return for giving up the privileges of a child. Laibele eventually died of his disease and the family of four became a family of three. Riva barely escaped deportation through the efforts of a friend of the family.

Riva continued to resist the insistence of authorities to "volunteer" for deportation to labor camps but she and her brothers eventually realized that they have no food, no hope and no choice. They were taken first to Auschwitz and split up. Riva was later sent to Mittelsteine before being moved again. She survived by staying close to friends and expressing herself through her poetry. She was barely alive when the Russians arrived and liberated the camp.

More summaries and resources for teaching or studying The Cage.

The Cage from BookRags. (c)2022 BookRags, Inc. All rights reserved.