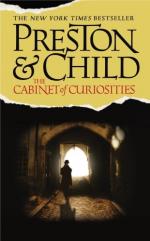 Douglas Preston
This Study Guide consists of approximately 35 pages of chapter summaries, quotes, character analysis, themes, and more - everything you need to sharpen your knowledge of The Cabinet of Curiosities.

The Cabinet of Curiosities Summary & Study Guide includes comprehensive information and analysis to help you understand the book. This study guide contains the following sections:

This detailed literature summary also contains Topics for Discussion on The Cabinet of Curiosities by Douglas Preston.

The Cabinet of Curiosities is another novel by the bestselling team of Douglas Preston and Lincoln Child. In this novel, Nora Kelly and Bill Smithback make another appearance, along with Special Agent Pendergast, the curious FBI agent from New Orleans. Pendergast enlists Nora's help in investigating the discovery of a collection of murder victims in the coal cellar of what was once Shottum's Cabinet of Natural Productions and Curiosities. These murder victims, thirty-six in all, could possibly be the victims of the most prolific serial killer in American history. However, greed and political corruption keep Nora and Pendergast from investigating the site to the extent they would like. Fortunately, archives and a paper trail lead them to a name and a location, placing Pendergast, Nora, and Bill in a horrific situation that will take a great deal of skill and luck to escape. The Cabinet of Curiosities is a historical mystery that keeps the reader guessing to the final word.

Nora argues with her immediate supervisor at the Museum of Natural History, Mr. Brisbane, for an increase in her department's funding. Unfortunately, Brisbane not only refuses, but insists Nora cut her budget further. Nora returns to her office to find a curious man waiting for her. His name is Special Agent Pendergast, and he wants her to inspect a newly discovered archeological site. Unfortunately, when they arrive Nora realizes that not only do they not have the authority to be there, but the site is quickly being destroyed by a medical examiner from the city. Pendergast gives Nora less than half an hour to inspect the site. Nora finds many bones, all of which have had their spinal columns excised in what looks like a surgical procedure. Nora also finds a dress that appears to have a piece of paper sewed into it. Before Nora can extract the paper, she is thrown out of the site.

Nora cannot get the dress out of her mind. Later that night, Nora returns to the construction site where she directs her boyfriend, Bill Smithback, to remove the dress while she distracts the security guard. The following day, Nora inspects the dress within which she withdraws a piece of paper with the name, age, and address of a young victim. This discovery gives Nora motive to continue working on the case with Pendergast, despite her boss's reluctance to allow her the time. They begin searching the Museum's archives where they find a letter from J.C. Shottum to a Museum curator, naming Enoch Leng as the murderer. It seems Leng had been attempting to find a way to prolong human life.

Nora gives a copy of the letter to Smithback for safe keeping, never imagining he would write an article about it for the New York Times. This article causes Nora a great deal of grief at her job, inspiring her to stop speaking to Smithback. This article, it appears, causes a copycat killer to begin attacking innocent people in New York City. At the same time, Nora is forbidden to continue work on the Leng case. However, Nora finds the body of the Museum's archivist and is nearly killed herself by the copycat killer, dubbed the Surgeon by the press. This motivates Nora to continue helping Pendergast despite her boss's clear instructions to stay away from the man.

Nora and Pendergast rent a room in a building that was built over Leng's second laboratory. Nora excavates the ground in the basement apartment and finds the bodies of three of Leng's enemies from the early part of the twentieth century. This discovery takes the focus from the copycat killer and places an inept cop in charge of the investigation. The discovery also inspires Bill Smithback to investigate Leng in an attempt to win back Nora's favor. Smithback finds an address for Leng, which he immediately goes to check out. While inspecting the house, Smithback is taken hostage by the copycat killer.

Upon learning of Smithback's disappearance, Nora and Pendergast locate Leng's home and go in search of him. They fall into a booby trap and are taken hostage. However, Pendergast has intimate knowledge of the house's design and the chains that hold him captive, giving him an edge over the killer. Pendergast frees himself and lures the killer into a subbasement, while Nora fights to save Smithback's life. In the end, the killer exposes himself to the poisons Leng was using to find a way to annihilate the entire human race, his ultimate project, and Pendergast manages to rescue himself, Nora, and Smithback. In the end, Pendergast discovers all of Leng's research and destroys it before it can do any more harm.

More summaries and resources for teaching or studying The Cabinet of Curiosities.

The Cabinet of Curiosities from BookRags. (c)2022 BookRags, Inc. All rights reserved.