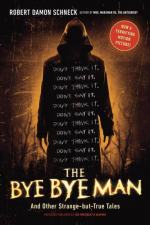 Robert Damon Schneck
This Study Guide consists of approximately 18 pages of chapter summaries, quotes, character analysis, themes, and more - everything you need to sharpen your knowledge of The Bye Bye Man.

This detailed literature summary also contains Quotes and a Free Quiz on The Bye Bye Man by Robert Damon Schneck.

Robert’s Damon Schneck’s investigative short story takes an in-depth look at how efforts have been made to communicate with the spiritual world. It begins with an examination of the origins and history of the Ouija board. The nineteenth Century saw a rise in mysticism focused on communicating with the astral plane, which gave rise to tools or methods used to communicate with the dead, including the Ouija board. After describing the history and creation of the Ouija board, Schneck begins to focus on instances where malevolent spirits have communicated through Ouija boards. This starts with a description of the notorious case of Mattie Turley, which involved a teenager shooting and killing her father, and then delves more deeply into a story into a story that Schneck’s personal friend Eli told him involving events dealing with a Ouija board and the mysterious figure, the “Bye Bye Man.”

This events started in the summer of 1990 and involved three friends who began to have séances. They began to grow bored with the friendly spirits who spoke to them through the board, and after a “strike,” they persuaded those spirits to connect them with the Bye Bye Man. The exact nature of the Bye Bye Man is never made clear - whether he was a spirit, a demon, or living human, but after a few eerie encounters, the séances end. Schneck admits the conclusion is not “a very satisfying conclusion” (145), but it serves as a springboard for Schneck himself to undertake an investigation of the origins of the Bye Bye Man, starting in Algiers, a part of New Orleans.

Schneck was unable to find any evidence that the Bye Bye Man actually existed in Algiers, or that he committed the railway murders that were rumored to be the start of his carnage. This leads Schneck to suggest that maybe the events in Wisconsin were, in fact, an attempted demonic possession. Schneck goes on to describe the nature of demonic possession and the events that lead to a person becoming possessed, including a discussion of how any of the three friends, who “were living lives that traditional moralists would describe as sinful” (153), would make ideal targets for demonic possession.

More summaries and resources for teaching or studying The Bye Bye Man.