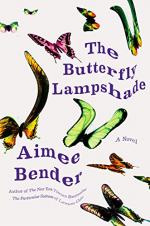 Aimee Bender
This Study Guide consists of approximately 40 pages of chapter summaries, quotes, character analysis, themes, and more - everything you need to sharpen your knowledge of The Butterfly Lampshade.

In Part Three, "Butterfly," Chapter 30, Francie considered Ovid's poem, and all its iterations throughout art. "Everyone wants a piece of that story, to imagine this amazing transformation, but it's all still operating on the same plane" (157). Francie wanted to know about the rupture between planes. The butterfly, beetle, and roses seemed evidence of this possibility.

In Chapter 31, Minnie was upset the first night she locked Francie in her room, but Francie insisted.

In Chapter 32, the morning after Francie tore up the stuffed animals, Elaine was "quieter than usual" (163). She insisted Francie call her classmate and return the blanket she left at her house. While waiting for her ride, Elaine said Francie's face looked different.

In Chapter 33, while waiting with Shrina for her train to Los Angeles, Francie noticed "the feeling that had been growing and swelling" inside her had finally passed (167). While...

More summaries and resources for teaching or studying The Butterfly Lampshade.