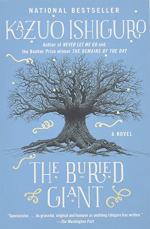 Kazuo Ishiguro
This Study Guide consists of approximately 38 pages of chapter summaries, quotes, character analysis, themes, and more - everything you need to sharpen your knowledge of The Buried Giant.

This detailed literature summary also contains Quotes and a Free Quiz on The Buried Giant by Kazuo Ishiguro.

The Buried Giant, by Kzuo Ishiguro takes place during a period of time in which an uneasy peace exists between the Saxons and Britons. Axel and Beatrice, an elderly Briton couple, decide to embark on a journey to visit a son whom they haven't seen for years and can barely remember. Their memory loss isn't simply because they haven't seen him for a long time, though. Everyone in the land suffers from an unexplained loss of memory.

In addition to finding their son, Beatrice also wants to consult a medicine woman to get treatment for a pain in her side. She tells her husband that it is nothing severe, but she would still like the woman to examine it. The two finish their chores and leave. Beatrice thinks she knows the location of their son's village, so she takes the lead. Along the way, rain forces them to take shelter in the ruins of a villa. There, they meet a boatman who ferries people from the mainland to an island and an old widow who haunts the boatman because he took her husband to the island and left her behind on the mainland.

As they talk, Axl and Beatrice learn that the boatman can take couples across together, but only after the answers to his questions convince him of their true devotion to each other. Beatrice worries that because she and Axl have no memories of their past, they won't be able to answer the boatman's questions when the time comes and will not be able to prove that they should cross the river together. Axl tries to reassure her.

The couple continues on their journey. They finally reach the Saxon village where the medicine woman lives. The climate is tense there, however, because of an ogre attack on a group of men and a young boy, Edwin, who had been out fishing. One of the boy's uncles manages to survive and return to the village to report the situation. While other members of the outing are not survivors, there is hope that his nephew is still alive as he was kidnapped by the ogres. A Saxon warrior, Master Wistan, happens to be there. He and two of Edwin's other uncles go to search for him. He returns with Edwin, but the pagan villagers shun the boy because he has a wound that they think will turn him into a fiend in the future. Since Edwin can't stay there, Ivor, a village elder, suggests that Master Wistan, along with Axl and Beatrice, escort him to Axl's and Beatrice's son's Christian village. Everyone agrees, and the four continue their journey together.

Their next destination is a monastery where a monk, Father Jonus, lives. The medicine woman in the Saxon village suggested that Beatrice visit him as he is even wiser than she. They have to be careful, though, because if they get lost, they could find themselves in the she-dragon, Querig's, territory.

As they travel to the monastery, they meet Sir Gawain, an old Knight who's the nephew of the now deceased King Arthur. Both Wistan and Gawain seem to recognize Axl, but Sir Gawain denies that he does so when asked by Wistan. While they are together, Master Wistan admits that he's there to kill Querig. Sir Gawain says his mission is to do the same.

Axl, Beatrice, Master Wistan, and Edwin continue on to the monastery. After a wait, they finally get to see Father Jonus who examines Edwin's wound and Beatrice's ailment. While talking to him, they also discover that Querig is the cause of the memory loss (which they called the mist). Beatrice encourages Wistan to go ahead with his mission to kill the she-dragon. While the group is at the monastery, soldiers come looking for Wistan and Edwin. Wistan battles them while a monk comes to help the other travelers escape. He takes them to a tunnel that is supposed to be an escape route. However, in reality, is the home of a beast who would have most likely killed them without Sir Gawain's intervention.

After they defeat the beast, Edwin returns to the monastery to find Master Wistan. Axl and Beatrice continue their journey alone, along with a goat a girl gives them. Their goal is to reach Querig and leave a goat, which contains poison, for her to feast upon. They run into Sir Gawain again. He takes them to Querig's territory where Master Wistan and Edwin catch up with them.

Sir Gawain finally admits that he's there to save Querig and ends up giving his life for her in a fight with Master Wistan. After killing Sir Gawain, Wistan completes his mission and kills Querig. He then warns Axl and Beatrice of the war to come now that the Saxons will remember that the Britons had attacked an unprotected village full of women, children, and the elderly who thought they were safe because of the deal Axl had brokered.

Axl and Beatrice have regained their memories. When they meet the boatman again, he learns about the time Beatrice cheated on Axl, why their son had left, and what had caused the son's death. He also learns that Axl had forbidden Beatrice to visit his grave.

The boatman says that the two will walk together on the island, but he'll have to take Beatrice first and come back for Axl. Beatrice convinces Axl to let her go. They part, and Axl walks to the shore without turning back even though the boatman tells him to wait for him to return.

More summaries and resources for teaching or studying The Buried Giant.