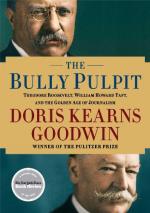 Theodore Roosevelt, after completing two terms as president, was on an African safari when word reached him of growing discontent with his hand-picked successor, William Howard Taft. The two men had grown close personally and politically, as their ascending public service careers paralleled and sometimes intersected each other. Both men professed great admiration for each other, publicly and privately. But Roosevelt became concerned that the progressive agenda for which they had both worked so hard to implement could be unraveling.

Roosevelt got a hero's welcome as his ship sailed into New York harbor June 18, 1910. He had remained true to his promise not to seek a third term, but his arrival in the midst of political uncertainty prompted him to express regret that he ever made that vow.

Roosevelt reined in runaway corporatism and worked for the common man in his Square...

(read more from the Chapter 1: "The Hunter Returns" Summary)