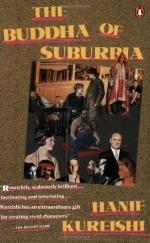 The Buddha of Suburbia Summary & Study Guide includes comprehensive information and analysis to help you understand the book. This study guide contains the following sections:

This detailed literature summary also contains Topics for Discussion and a Free Quiz on The Buddha of Suburbia by Hanif Kureishi.

The Buddha of Suburbia by Hanif Kureishi is a satirical coming of age story set against a background of racial and social tensions in 1970s London. Karim is a half-English and half-Indian teenager struggling to find his place in the world and discover who he is. The Buddha of Suburbia examines human behavior and how the choices we make affect those around us.

Karim's father, Haroon, is a first generation immigrant who has been stuck in a job he hates and an unhappy marriage for too long. He begins a relationship with Eva, a woman with whom he shares a common interest in Buddhism and Eastern Philosophy. Eva encourages Haroon to share his outlook with others. Karim accompanies his father to the early meetings arranged by Eva, mostly because he has a crush on Eva's son, Charlie.

After discovering that Haroon and Eva are more than just friends, Karim seeks advice from his childhood companion, Jamila, but discovers that her situation is more dire as her father is forcing her into an arranged marriage. Karim cannot save his friend and in fact, likes Changez, the man she is forced to marry, although Changez is a grave disappointment to Jamila's father, Anwar.

Haroon leaves Karim's mother, Margaret, for Eva and Karim goes to live with his father and Eva. Eva enlists Karim to help redesign her house, which she then sells and moves from the suburbs into the city. Karim discards his educational opportunities, seeing them as unimportant. He enters his twenties, and a new life in the city, naive but hopeful for his future.

His new life proves to be a disappointment, but he does begin a career as an actor. His first role, in "The Jungle Book" proves disappointing as he is required to portray racial stereotypes, but the production and his performance is successful enough to attract the attention of Matthew Pyke, a noted theater director, who casts Karim in his next play.

In Pyke's acting troupe, Karim begins a love affair with Eleanor, a fellow actor, and discovers a lot about himself. He also allows himself to be used by Pyke, Eleanor, and others around him. He struggles to find his own identity and continues to feel lost and disappointed in the world around him. The play is a success and he moves to New York.

Karim grows to hate the people he has come to associate with. He stays in New York when they all go home. For a time, he lives with Charlie, who has become a rock star, but he is as unhappy in New York as he was in London and goes home.

Back in London, Karim continues his professional success, becoming a soap opera actor, but also begins to find success in his personal life, realizing that the key to being happy is to surround yourself with family and people who genuinely love and care for you, even through all your disagreements. Karim truly begins to discover who he is and where his place is in the world and looks to the future with optimism.

The Buddha of Suburbia from BookRags. (c)2022 BookRags, Inc. All rights reserved.