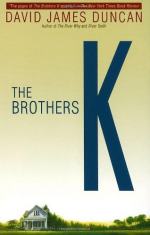 David James Duncan
This Study Guide consists of approximately 39 pages of chapter summaries, quotes, character analysis, themes, and more - everything you need to sharpen your knowledge of The Brothers K.

This detailed literature summary also contains Topics for Discussion and a Free Quiz on The Brothers K by David James Duncan.

The Brothers K, by David James Duncan, is about the Chance family from Camas, Washington. The story is told by one of the sons, Kincaid. The story begins in the early 1950s and continues to the mid-1970s.

Kincaid Chance tells the story of his family: father Hugh, mother Laura, brothers Irwin, Everett, Peter and Kincaid, sisters Beatrice and Winifred. The Chance family resides in Camas, Washington. Hugh is a failed professional ball player who is forced to work at a pulp mill in order to provide for his family, and Laura is a homemaker who is extremely religious. Hugh's hopes for a recovery from a minor injury are dashed when his pitching thumb is ruined by an industrial accident at the mill.

The brothers are close and have many discussions during their childhood regarding baseball and religion. Hugh and Laura have disagreements that balloon into loud arguments and end with Laura leaving the family home to go to her brother's house in Spokane. Often she takes the twin girls with her. She creates a void in the house that Hugh tries to fill, and eventually she returns each time.

An uneasy truce exists in the family with Hugh tolerating Laura's eccentricities and fanaticism about religion because he knows her darkest childhood secret. When the eldest boys become teenagers, they do not have that knowledge and just think their mother is crazy, causing arguments that erupt into Laura physically attacking Everett and Irwin.

Hugh returns to baseball after an unusual surgery that replaces his damaged thumb with his big toe. He begins a coaching/backup pitcher career that allows him to return to the game and a life he loves. Laura begins a cleaning business that helps out the family's economic situation.

Everett, Peter and Irwin go to college. Peter goes to the east coast and eventually stops communicating with his family while he immerses himself in eastern religions. Everett becomes a student radical, protesting against the war in Vietnam. Irwin does not do well in college, and when his girlfriend Linda becomes pregnant, drops out to work for his new family. He is soon drafted and sent to Vietnam.

Everett burns his draft card and emigrates to Canada to avoid the authorities. The love of his life, Tasha, comes to see him and then deserts him. He dissolves into depression.

Peter is granted a scholarship to go to India and realizes his dream to be in that country is nothing like the reality of the poverty, heat and foreignness he experiences there.

In Vietnam, Irwin has a life changing experience that challenges his religious beliefs and his sanity. He attacks his captain and is sent to a mental hospital in southern California. The Chance family reunites to fight the government and retrieve their son from this hospital prison before he dies from medication and electroshock therapy.

Peter returns from India disillusioned, but soon joins into the rescue mission. Everett comes back to America only to be imprisoned after an impassioned speech to Laura's church. Hugh leaves baseball forever so he can stand vigil for his son Irwin. Laura and the rest of the children form a caravan with some of the church members and they all meet up at Mira Loma, at the hospital gates.

When Irwin is finally freed, the family goes home to accept a new reality: Hugh is dying of lung cancer. Irwin becomes Hugh's caretaker and it eases Hugh's death. After Hugh dies, Irwin becomes interested in woodstoves, eventually building a successful company from this obsession. Irwin and Peter own the company together, and Kincaid works for them. Everett gets out of jail and marries Tasha; they have a son.

At the end of the novel, the brothers are all grown, have careers and children. Despite the many opportunities the family has to break apart, their love for baseball, their parents, and for each other holds them together.

More summaries and resources for teaching or studying The Brothers K.