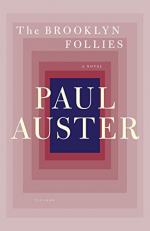 Auster, Paul
This Study Guide consists of approximately 38 pages of chapter summaries, quotes, character analysis, themes, and more - everything you need to sharpen your knowledge of The Brooklyn Follies.

This detailed literature summary also contains Quotes and a Free Quiz on The Brooklyn Follies by Auster, Paul.

The following version of this book was used to create this study guide: Auster, Paul. The Brooklyn Follies. Picador, 2006.

Nathan Glass is a retired insurance salesman in his early sixties. He was diagnosed with lung cancer, although the cancer is in remission. Nathan is recently divorced and has an adult daughter named Rachel. After Nathan’s divorce, he moves to Brooklyn, New York, to spend his retirement. One day, he encounters his nephew, Tom Wood, whom Nathan has not seen in years. Tom was a gifted scholar of literature, but towards the end of his time in a doctoral program, he lost his will to finish his dissertation. He left the program and moved to new York City where he drove a taxi for a living. One day, he met Harry Brightman, the owner of a Brooklyn bookstore called Brightman’s Attic. Harry hired Tom to do writing and administrative work in his bookstore. Harry eventually told Tom that his real name is Harry Dunkel and that he used to live in Chicago, but he left after being imprisoned for almost two years for art fraud.

Tom introduces Nathan to Harry, and the three of them become close friends. One day, when Tom and Nathan are having lunch together, Tom talks about his sister, Aurora. She ran away from home when she was 17 years old and became an actress in pornographic films. After having a child out of wedlock, Aurora and her daughter, Lucy, moved in with Tom while he was still in graduate school. However, Aurora left soon after and took Lucy with her. The last Tom heard from her, she was engaged to be married to a man named David Minor. Tom then tells Nathan that he has a crush on a local woman but he does not have the courage to speak to her. Nathan approaches the woman, whose name he learns is Nancy, and he introduces Tom to her. Tom is sad to discover that she is married.

Harry later tells Nathan that he has become involved in a scheme to forge and sell a valuable manuscript. Nathan warns Harry against this, as his previous attempt at fraud led to his imprisonment. Harry does not heed Nathan’s warning. Later, Aurora’s now nine-year-old daughter Lucy arrives on Tom’s doorstep in Brooklyn. She says little, and because Nathan and Tom do not know Aurora’s whereabouts, they decide to bring Lucy to Vermont to live with relatives. On the way to Vermont, they stop at an inn called the Chowder Inn. Tom develops a romantic rapport with the inn owner’s daughter whose name is Honey Chowder. Nathan decides that he should actually be the one to take care of Lucy.

After Nathan, Tom, and Lucy return to Brooklyn, Nathan and Tom discover that Harry has died of a heart attack. They learn that the forgery scheme in which Harry was involved was actually a hoax meant to extort Harry, and the stress of it caused Harry’s fatal heart attack. Harry’s will leaves the bookstore to Tom, so Tom and Nathan take over the store’s operations. One day, Honey Chowder arrives in the store and declares her love for Tom. They decide to move in together. Tom later receives a panicked phone message from Aurora, who gives her address in the message. Nathan goes to Aurora’s home in North Carolina, where she lives with her husband, David Minor. Aurora asks Nathan to take her to Brooklyn, so he does.

On the way to Brooklyn, Aurora explains that David is a possessive and manipulative husband, and she realized that she and Lucy needed to escape their life with him. After Nathan and Aurora arrive in Brooklyn, Nancy says that Aurora and Lucy can stay with her for the time being. Nathan enters into a relationship with Nancy’s mother, Joyce. Nathan later discovers that Nancy and Aurora have entered a romantic relationship with each other. At the end of the novel, Nathan, Tom, and Aurora have all settled into long-term relationships in Brooklyn.

More summaries and resources for teaching or studying The Brooklyn Follies.