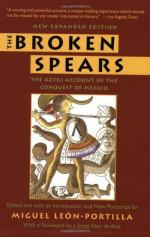 The Broken Spears 2007 Revised Edition: The Aztec Account of the Conquest of Mexico Setting & Symbolism

This place had a confederation of four republics. The people from Tenochtitlan were constantly battling this place, taking prisoners for sacrifice. This is mostly likely why it made an alliance with the Spaniards.

This place was the rival of Tlaxcala. The people of Tlaxcala joined with the Spaniards for revenge of the place and the people here were massacred at an assembly in the courtyard of the god.

These were brought to the Spaniards as welcoming gifts.

These were brought to the Spaniards as welcoming gifts.

This place is where Prince Ixtlilxochitl persuaded the people to join with the conquistadors as they marched to Tenochtitlan.

This is the entrance to Tenochtitlan where Motecuhzoma greeted Cortes.

This is what the Spaniard lusted after, asking for more of it even after they conquered the city.

This is where Cortes set up his...