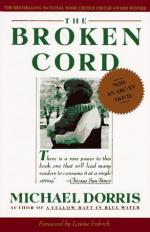 Michael Dorris
This Study Guide consists of approximately 27 pages of chapter summaries, quotes, character analysis, themes, and more - everything you need to sharpen your knowledge of The Broken Cord.

This detailed literature summary also contains Topics for Discussion and a Free Quiz on The Broken Cord by Michael Dorris.

When Michael Dorris is in his twenties, he decides that he wants to be a father. He is not seriously dating anyone at the time and decides to try to adopt. He applies and is almost immediately approved as an adoptive parent. Months later, he is told that an Indian boy is available. The social worker, Denis Daigle, makes certain that Michael knows that the boy has problems. Michael later learns that the child, who Michael names Adam, is a victim of Fetal Alcohol Syndrome. He ignores the warnings from Denis and other social workers and bonds with Adam immediately. Social workers help facilitate the adoption and Michael and Adam are soon living together as father and son. When Adam has a series of seizures, Michael goes searching for answers though it is later that he will learn the full story of Adam's birth mother and the impact her drinking had on Adam. During Adam's first hospital stay, a young nurse points out to him that if Adam's problems turn out to be too serious, Michael can always stop the adoption process. However for Michael, who has already fully accepted the responsibility for Adam, it is not an option.

Michael later adopts another Indian boy, Sava, and a daughter, Madeline. After the three are an established family, he marries Louise Erdrich and they later have two daughters of their own.

Michael initially has little in the way of comparison to understand just how far behind Adam is. Over the early years, Michael remains hopeful that he will eventually find Adam's hidden talents, that Adam will get past his rocky start in life, or that something will just click for Adam so that he can grow into a happy, productive adult. Years pass before Michael gives up that dream and comes to realize that Adam will never be able to live completely on his own. The road to that realization is filled with trials. Michael insists that Adam be given every opportunity to learn and grow. Occasionally it seems that he has mastered some skill or learned something new but it typically drops by the wayside as soon as something else is introduced.

As Michael struggles to help Adam, he discovers that Adam's parents were alcoholics, that his mother died of alcohol poisoning and his father's death was also alcohol related. As Michael begins to learn about Fetal Alcohol Syndrome—or FAS—he sees dozens of children and case studies that are exactly like Adam. Michael has to eventually accept that not only does his son have little to look forward to in life, he has no idea what he has missed out on.

More summaries and resources for teaching or studying The Broken Cord.