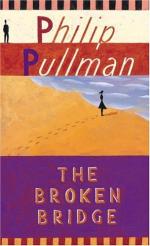 Philip Pullman
This Study Guide consists of approximately 37 pages of chapter summaries, quotes, character analysis, themes, and more - everything you need to sharpen your knowledge of The Broken Bridge.

This detailed literature summary also contains Topics for Discussion and a Free Quiz on The Broken Bridge by Philip Pullman.

The Broken Bridge by Philip Pullman is a mysterious coming of age tale whereby sixteen-year-old Ginny Howard launches her own personal investigation into her family's background after clues and inconsistencies arise that create more questions for her than answers. She begins her journey as an innocent and sheltered adolescent who is protected by her father from a darker side of the world. Ginny's strong personality and her growing knowledge of her rare artistic talent work to keep her grounded and secure during her quest for the shocking truths she is about to uncover in her family's history.

An introductory childhood flashback returns Ginny to a time and place where she hears the playground children saying, "Eeny, meeny, miney, Mo', Catch a nigger by his toe" (p. 3). When Ginny thinks she desires to be more like them, her father assures her she is fine as herself. The children mysteriously stop calling her Eeny Meeny.

A lady named Wendy Stevens, of Social Services in Liverpool, visits the Howards. Ginny feels scared that the woman may take her away from her father because she may erroneously think her father abusive.

Ginny roams her kingdom, the land between the sea and the hills, when she sees Andy, the only other black person growing up white in their town. Gangster Joe Chicago enters her kingdom and Andy hides. Andy soon asks Ginny is she wants a job at the Yacht Club. After Ginny speaks with her best friend Rhiannon, she also gets a summer job at the Dragon Café, which is owned by Rhiannon's parents.

Ginny soon discovers that Rhiannon has an estranged sister named Helen. Ginny cannot believe that an argument between family members can end in estrangement. Helen phones Rhiannon to ask if Ginny's father has ever been in prison. Ginny calls on Helen to find out more about the rumors.

Ginny helps Andy with his trailer on the beach when she meets Andy's friend Stuart, who has been to Haiti on business. The two talk about voodoo. After Stuart leaves, Ginny and Andy confide in one another about their feelings of being different from the others in town due to their skin color and their white education. They feel as if they do not fit in anywhere.

Another childhood flashback brings memories to Ginny of her artistic talent and the stupid people who thought she was good even when she tried to be bad. Ginny also remembers the little boy she thought would die of a cat scratch and the little girl who refused to hold Ginny's hand on the way to the playground. Another memory includes the time when some girls refused to tell Ginny their secret unless she swore on her mother's deathbed.

A telephone call from Wendy Stevens allays any fear Ginny has regarding Social Services removing Ginny from her father's care. Soon after, Ginny's father discloses that she has a half-brother who will be coming to live with them due to his mother's imminent death from cancer.

Another flashback brings to mind the happiest day in Ginny's life. It is a time when she is on her father's shoulders and she feels as if she is flying. The sun shines brilliantly, the wind blows the white clouds and sheets hanging out to dry, and the sky is an infinite blue.

When their shifts are complete at the Café, Ginny and Rhiannon ride to Gwynant valley on their bicycles. Ginny asks why the bridge over the river is newer than the remainder of the road. Rhiannon talks about what little she knows regarding a car accident on the bridge a long time ago. The bridge was broken.

The next childhood flashback carries memories of Ginny's grandparents whom she visited once, she thinks. The elderly couple is odd in some indescribable way to Ginny. These grandparents are relatives of both Ginny and Robert, her new brother.

After Robert's mother dies, Ginny's father heads to Liverpool. Ginny's father only vaguely answers Ginny's growing list of questions regarding her family. When Ginny asks Rhiannon how her father could have a child with another woman, Rhiannon simply tells her that her father is sexy. According to Rhiannon, sexy and kind do not exist in one person.

Ginny's friends Andy and Dafydd invite her to the fair, where Andy runs into Joe Chicago. After the two men talk and Joe punches Andy in the shoulder, Andy hands money over to the gangster. Ginny and Dafydd ride the Ghost Train, which is Ginny's favorite carnival ride. Dafydd discloses more details to Ginny regarding the car accident on the broken bridge. According to Dafydd, a baby freezes to death in the car after someone steals the fur-lined jacket that cradled the baby while the man who was driving goes for help.

Another childhood flashback reveals a time when Ginny is in a trailer with a woman named Maeve and a girl named Dawn. A faint memory of a murder in the woods surrounding the trailer lingers in Ginny's mind. Ginny remembers one of Maeve's stories where another little girl touched the stove and got burned. The only part of her finger left was the bone, like a skeleton.

Ginny visits Stuart, who lives at her favorite house near the Yacht Club. They discuss her mother, painters, Haiti and voodoo. Stuart teaches Ginny about the Haitian gods. Ghede, or Baron Samedi, is her favorite because his ghost is twofold. One part of him is a comedian and the other is the lord of death. Ginny gets an idea to search for her mother's paintings from Stuart.

When Ginny inquires about her mother's paintings, her father says they were probably returned to Haiti. As this does not make sense to Ginny, she pushes her father until he tells her he was never married to Maman. Rather, he was married to Janet, Robert's mother. He explains that he met and fell in love with Ginny's mother when he was married to Janet. Ginny is livid when she realizes she is illegitimate. She runs to her kingdom.

When Robert arrives, he and Ginny are silently hostile to one another. Ginny feels pushed away from her father and Robert; she wants to get closer to her mother. Ginny's next childhood flashback is a time when she goes camping with her father. She feels like a queen and she thinks he is the king.

The next time Ginny sees Andy and Dafydd, she lets them know her suspicions about Joe Chicago being the man who stole the jacket which killed the baby so many years ago. Ginny wants Dafydd to pick her up after she goes to Helen's to talk with Joe.

After Ginny's shift at the Yacht Club, she heads home to pick up Robert for the beach barbecue that Glyn Williams invited her to. At the party, Ginny enjoys champagne and she dances with Andy. When she kisses his neck, the onlookers comment jokingly. When Ginny finds out from Robert that Andy is gay, she can hardly contain her embarrassment. She runs to the ancient Saint Cynog church and cries.

Ginny and Rhiannon visit Stuart. He lets Ginny have an art magazine called Modern Painters and Ginny finds an exhibition at the L'Ouverture Gallery that will honor a painter named Anielle Baptiste. Ginny delightedly draws a story picture of The Broken Bridge.

Ginny is on three urgent missions. First, she will finish her broken bridge painting. Second, she plans to view her mother's paintings and not tell anyone about them. Finally, she will get the truth out of Joe Chicago.

When Helen calls to tell her Joe is coming to her house, Ginny takes the next train to Porthafon. At Helen's house, Ginny waits in an upstairs bedroom until Joe Chicago appears. When Joe enters, the ghost of Baron Samedi possesses Ginny's body and asks for the jacket. In a panic, Joe rips off his jacket and throws it at Ginny's feet.

Back at home, Ginny bickers with Robert. He bitterly tells her that she is arrogant and sticks her nose up at people she thinks untalented. Ginny broods the remainder of the day.

The next day, Wendy Stevens calls to let Ginny know that she was a foster child of Maeve Sullivan's almost fifteen years ago. There was a murder investigation in the woods near her home in Staunton Chase. Ginny rushes to get Robert so they can pay their grandparents in Chester a visit.

Tony has an affair with Anielle Baptiste, who bears their child Ginny. When Tony asks his wife Janet if she will adopt Ginny, Janet refuses and leaves Tony. According to Grandma, Ginny's mother is a black whore who uses sex to steal another woman's husband. She gets pregnant so that she can end her cycle of poverty. Ginny is devastated by this story and she leaves Robert so she can go off and think.

Ginny sees things more clearly after she wanders around all night. Her decision to return Joe's jacket and apologize to him brings forth a bigger revelation. When Ginny arrives at Joe's house, she sees the dangerous Joe Chicago tenderly caring for his elderly, senile mother. Joe enlightens Ginny regarding her father's prison sentence. Ginny's father kidnapped her, and until he could get everything sorted out, he was in jail. Ginny's father fought to get her back.

When Ginny telephones her father, he comes to pick her up immediately. As Ginny confides to Robert over the phone, the two siblings feel a closeness that previously eluded them. When Ginny's father picks her up, she tells him that she met her mother. After a silence, Ginny's father exposes all of his secrets and fears.

Ginny returns to her kingdom by the sea. She views the land and seascape as an artist would. She views the scenery as the newly enlightened adult she has recently become. She still wonders if she is likable. Then, Glyn Williams appears and asks her to go horseback riding. Ginny accepts the invitation and then heads home. The porter at the train station, the news dealer, and Harry Lime all wave and say good morning to her.

More summaries and resources for teaching or studying The Broken Bridge.