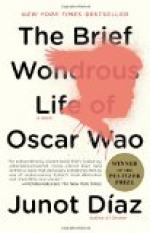 Related Topics
How to Date a Brown Girl (Black Girl, White Girl, or Halfie)
Ysrael
This Is How You Lose Her
Alma
The Cheater's Guide to Love

Junot Díaz
This Study Guide consists of approximately 56 pages of chapter summaries, quotes, character analysis, themes, and more - everything you need to sharpen your knowledge of The Brief Wondrous Life of Oscar Wao.

This detailed literature summary also contains Quotes and a Free Quiz on The Brief Wondrous Life of Oscar Wao by Junot Díaz.

A family curse, mysteriously missing manuscripts and one man’s love trials are the focus of the novel “The Brief Wondrous Life of Oscar Wao” by Junot Diaz. Three generations of the Cabral family have been afflicted with a curse believed to have been put on them by the Dominican dictator Rafael Trujillo. The story — narrated by Lola, the sister of the main character, and Yunior, his best friend — is full of street corner slang, Spanish phrases and references to modern culture. Through the novel, Lola, Yunior and Oscar try in their own ways to understand the cause of the Cabral family’s bad luck and find some way to put an end to it.

The family curse begins with Abelard Cabral, a wealthy surgeon with two beautiful daughters. During the reign of the Trujillo, it was common practice for the dictator to demand sexual relations with any woman he chose, and it appears he has his eye on Jacquelyn, Ablelard’s oldest daughter. One common explanation for why Abelard was jailed for slander was because he loved his daughter enough to try to keep her out of the Trujillo’s hands. It is believed the Trujillo put a curse on the family because he couldn’t get Jacquelyn. With the exception of Beli, all members of the Cabal family, including the head servant and Abelard’s mistress, are mysteriously killed.

Beli seems to take on the curse from her father. When she is finally found by her cousin, La Inca, who adopts Beli as her own daughter, Beli has been treated as a servant and badly burned because she insisted on going to school. La Inca takes her in and tries her best to raise the girl in a way that pays honor to Beli’s parents, but Beli suffers with a bad case of love sickness. Her first disastrous affair gets her kicked out of the prestigious school in which her adoptive mother managed to secure her a place. Her second lands her in direct opposition with the Trujillo as she becomes pregnant by the husband of the dictator’s sister. When she refuses to cooperate and have an abortion, she is taken to a canefield and nearly beaten to death. The only thing that keeps her alive is an unusual golden mongoose promising her that she will have a daughter and a son.

Beli seems to pass the curse along to her son, Oscar, who is described as an overweight nerd. Despite his unattractiveness, Oscar dreams of love. He finally finds his great love in Ybon, a prostitute who lives down the street from La Inca. Ybon, however, has a lover who is a police captain. The capitan does not take kindly to Oscar. He threatens Oscar, then has him beaten in an attempt to keep him away from Ybon. Oscar decides his love is worth the chance he might die and travels to Santo Domingo not only to try to romance Ybon but also to research and write about the family’s curse. Oscar is killed at the captain’s orders because of his love for Ybon. In a letter to his sister, Oscar claims to have found a cure for the family curse but the manuscript he says he has written never arrives.

More summaries and resources for teaching or studying The Brief Wondrous Life of Oscar Wao.