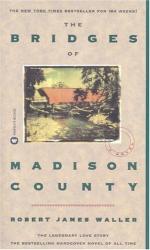 Robert James Waller
This Study Guide consists of approximately 30 pages of chapter summaries, quotes, character analysis, themes, and more - everything you need to sharpen your knowledge of The Bridges of Madison County.

The Bridges of Madison County Summary & Study Guide includes comprehensive information and analysis to help you understand the book. This study guide contains the following sections:

This detailed literature summary also contains Topics for Discussion on The Bridges of Madison County by Robert James Waller.

The Bridges of Madison County by Robert James Waller is the story of two star-crossed lovers, Robert Kincaid and Francesca Johnson. Robert was a lonely figure as much by desire as by circumstance. Even as a child, his teachers recognized how intelligent the young boy was. However, they also noticed that Robert was a remote child who was difficult to reach. His mother knew that what the teachers told her was the truth. Robert often played alone and didn't seem to need companionship.

Despite his brilliance, there was no money for college for the eighteen-year-old Robert. His father died shortly after Robert graduated from high school. With the Great Depression looming, there weren't many options for a young man who had to support his mother. Robert joined the military to fight in World War II. He became a photographer's assistant and it was then that he discovered what would prove to be his life's passion. While he loved the technical aspects of photography, he most enjoyed the artistry that he immediately saw as integral in becoming a successful photographer.

After he served his four years, he returned to New York City and became a fashion photographer's assistant. He became involved with some of the beautiful models but no long term relationships developed. Some years later, he married Marian. However, Robert was a photographer for National Geographic and had assignments all over the world. Marion told him that she knew there was something within him but that she couldn't reach it. After five years, the marriage ended under the strain of his remoteness and his lengthy absences.

Francesca was a young school teacher in Naples, Italy. She longed to fall in love and be married. Unfortunately, many of the young men her age had been killed in war or were POWs. When she met American soldier Richard Johnson she was vulnerable to his attentions. Soon after they met, they married and moved to a rural area in Madison County, Iowa. They had two children, Michael and Carolyn, but Richard feared intimacy and a deep, rich relationship never developed.

Robert was fifty-two when he drove from his home in the state of Washington to Madison County in Iowa. His assignment from National Geographic was to photograph the famous covered bridges of the area. Robert had trouble locating one of the bridges and stopped at a home along a rural road to ask for directions. The young woman on the porch watching him walk up the drive was Francesca. Her husband and kids were gone for the week to the State Fair. The attraction between the two was immediate.

The two fell in love over the four days that her family was gone. It seemed to be destiny that the two met at what were vulnerable and needy times in their lives. Robert asked her to go with him but she could not leave her responsibilities behind. When he drove off, it would be the last time they would ever see each other. The two both left behind legacies of love and sacrifice. Robert and Francesca never stopped loving each other and the love that they shared during those few days was powerful and all-consuming and enough to last a life time.

More summaries and resources for teaching or studying The Bridges of Madison County.

The Bridges of Madison County from BookRags. (c)2022 BookRags, Inc. All rights reserved.