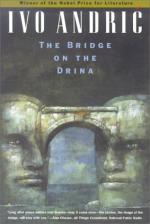 The Bridge on the Drina Summary & Study Guide

Ivo Andrić
This Study Guide consists of approximately 63 pages of chapter summaries, quotes, character analysis, themes, and more - everything you need to sharpen your knowledge of The Bridge on the Drina.

The Bridge on the Drina Summary & Study Guide Description

The Bridge on the Drina Summary & Study Guide includes comprehensive information and analysis to help you understand the book. This study guide contains the following sections:

This detailed literature summary also contains Topics for Discussion and a Free Quiz on The Bridge on the Drina by Ivo Andrić.

The Bridge on the Drina is the chronicle of a beautiful stone structure erected in Ottoman times in Višegrad, Bosnia and surviving unscathed until the opening days of World War I. The novel examines select people across three and a half centuries whose lives revolve around the bridge.

The Bridge on the Drina is a beautiful, white structure spanning a fast-flowing green ribbon of water. Over centuries, the bridge inspires folk tales. The bridge comes about when a kidnapped ten-year-old Christian boy grows up to be Grand Vezir and, recalling the misery of a ferry crossing, commissions a stone bridge. It and a matching caravanserai go up in 1567-71 under two overseers, one cruel and one just. The impalement of a saboteur is depicted graphically. By the late 18th century, the Stone Han grows decrepit, but the bridge withstands even a great flood.

Jumping forward to the 19th century and the Serbian insurrections, the Austrian army occupies Višegrad, throws up a blockhouse on the bridge, and begins beheading suspected Serbian nationalists. The tale of two affluent Muslim families arranging a marriage for beautiful but stubborn Fata ends in tragedy and her suicide enters folklore. So, too, does Alihodja's humiliation as Muslim factions debate whether to resist the Austrians actively or passively. Changes in Višegrad's life are examined in vignettes of Milan Glasičanin, the gambler, the Rusyn soldier Fedun and the beautiful Turkish girl, who turns out to be a Serbian collaborator, and Lotte, who runs a successful hotel and cares for her relatives. Salko Ćorkan is tormented by supposed friends and becomes a legend by dancing across the bridge. More changes come to town as the bridge is repaired, a railroad line skirts it, and the bridge is mined for destruction by the Austrians, should war ensue.

In the summer of 1913, students debate ideologies on the bridge. Among the young intellectuals are Stiković and Glasičanin, rivals for the hand of the lovely schoolmistress Zorka. The summer of 1914 begins with blissful weather and abundant crops but gives way to persecution of the Serbs in retribution for killing Archduke Ferdinand, the bombardment of the bridge and town center, and Višegrad's forced evacuation. Alihodja fails to leave as ordered and is injured when a chunk of the exploded bridge crashes into his store. He dies walking home, convincing himself that God somewhere is creating rather than destroying.

More summaries and resources for teaching or studying The Bridge on the Drina.

The Bridge on the Drina from BookRags. (c)2022 BookRags, Inc. All rights reserved.