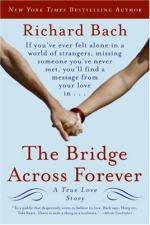 The Bridge Across Forever: A Lovestory Summary & Study Guide

Richard Bach
This Study Guide consists of approximately 28 pages of chapter summaries, quotes, character analysis, themes, and more - everything you need to sharpen your knowledge of The Bridge Across Forever.

The Bridge Across Forever: A Lovestory Summary & Study Guide Description

The Bridge Across Forever: A Lovestory Summary & Study Guide includes comprehensive information and analysis to help you understand the book. This study guide contains the following sections:

This detailed literature summary also contains Topics for Discussion and a Free Quiz on The Bridge Across Forever: A Lovestory by Richard Bach.

"The Bridge Across Forever: a Lovestory" by Richard Bach is a work of non-fiction. The story begins with Richard Bach waiting for an unnamed female. The author is sitting in the cockpit of his biplane in a rented a field in Russell, Iowa. It is autumn. There are nearly 60 cars surrounding the hayfield and Bach hopes that the woman will be in the crowd. The crowd is there to see a show and Bach takes his plane through a series of maneuvers designed to wow the crowd.

Bach fights to keep from being distracted while he scans the crowd for the woman—the perfect woman—destined to be his soulmate.

Bach refers to his relationship with fellow pilot Donald Shimoda, who turns out to the Bach's spiritual Messiah. Shimoda has since died but still keeps in contact with Bach who often needs spiritual guidance.

Bach decides that it is time to move on and sells his beloved biplane before heading to Florida. Once in Florida, Bach contacts his agent, Eleanor, and discovers that his latest book is on the best seller list of Publisher's Weekly and The New York Times, both very prestigious positions. Bach learns that he is a millionaire and is completely baffled by the amount of money and what to do with it. Bach buys a new plane and makes arrangements to hire a financial manager, tax attorney, and business manager, all of which turn out to be poor and life changing choices.

Bach's relationship with Leslie Parrish is described in detail. Bach also speaks of other women with whom he has casual relationships. Leslie is different in that she is Bach's closest friend and business partner. The two eventually fall in love, which is completely against Bach's nature.

Bach describes in detail his spiritual quest, much of which mirrors Leslie's experiences. There is reference to autohypnosis, astral projection, reincarnation, self programmed dreaming, soulmates, the true absence of time, and much, much more.

Although the book is mainly chronological, it skims over some things and tends to go off on tangents.

This is Bach's first truly autobiographical work which can be attributed, at least in part, to Leslie and the need to write about her and their relationship.

Bach's financial trouble with the IRS is an integral part in the book. As a result of Bach's incompetent and apathetic managers, the author loses about $800,000 of his newfound wealth. Moreover, none of the managers seems the least bit sorry and are certainly not going to be held responsible for the losses. Even though the losses are so large that Bach will not have any tax liability, the managers do not inform the IRS of this fact and Bach ends up owing $1 million. After 4 years, a large amount of trouble and grief, Bach claims bankruptcy. John Marquart, Bach's tax attorney hired by Leslie, tries his best to sort out and settle the matter. During this time, Marquart relays how the IRS works and details many of the agency's absurd policies and desire to avoid blame at any cost.

Bach believes that every event in one's life is self-imposed to further one on a spiritual level. As Bach explores this belief, he and Leslie rebuild what was lost and focus on building a new life together.

More summaries and resources for teaching or studying The Bridge Across Forever: A Lovestory.

The Bridge Across Forever: A Lovestory from BookRags. (c)2022 BookRags, Inc. All rights reserved.