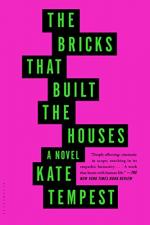 Plot Summary
+Chapters Summary and Analysis
Chapter 1: Leaving
Chapter 2: Marshall Law
Chapter 3: The Truth
Chapter 4: Lonely Daze
Chapters 5 and 6: Chicken and The Beigeness
Chapters 7 and 8: Hot Night Cold Spaceship and Theme from Becky
Chapters 9 and 10: Stink and The Heist
Chapters 11 and 12: To the Victor the Spoils and Circles
Chapters 13 and 14: A Hammer and Happy End
Chapter 15: A Returning
Free Quiz
Characters
Symbols and Symbolism
Settings
Themes and Motifs
Styles
Quotes
Order our The Bricks That Built the Houses Study Guide

The Bricks That Built the Houses Summary & Study Guide

Kate Tempest
This Study Guide consists of approximately 57 pages of chapter summaries, quotes, character analysis, themes, and more - everything you need to sharpen your knowledge of The Bricks That Built the Houses.

The Bricks That Built the Houses Summary & Study Guide Description

The Bricks That Built the Houses Summary & Study Guide includes comprehensive information and analysis to help you understand the book. This study guide contains the following sections:

This detailed literature summary also contains Quotes and a Free Quiz on The Bricks That Built the Houses by Kate Tempest.

The following version of this book was used to create this study guide: Tempest, Kate. The Bricks that Built the Houses. Bloomsbury, 2016.

The Bricks that Built the Houses focuses on two main characters, Harry and Becky, who have spent their whole lives in gritty South London. The book opens in media res (in the middle of action) for a whole chapter before later flashing back to explain who the characters are and how they found themselves in this situation. In the first chapter, Leon, Harry, and Becky are driving out of London with a suitcase full of money.

The next day, Becky meets Pete at the restaurant where she works. Giuseppe’s is owned by her Uncle Ron, who named it after his own father. Becky is drawn to Pete because Pete is reading her father’s book. That night, by happenstance, Becky and Pete meet up at a club, where they exchange phone numbers and information.

Soon, Pete and Harry, who are siblings, eat dinner with their mother, Miriam, and her new boyfriend, David. The dinner is awkward, and Pete reveals his disinterest in building his career. Later, Pete and Becky meet up for their first date. Soon after, they are smitten with one another, but Pete is uncomfortable with the way in which Becky earns her money.

In the apartment they share, Harry and Leon worry about their new drug supplier, Rags. Their regular supplier, Pico, has been taken to prison. They plan to meet with the new supplier soon so they can get out of the drug dealing business sooner.

Becky is making headway as a dancer. She has choreographed her own routine and has been called in to dance a part after a lead dancer got sick. Despite her success, Pete is jealous of Becky’s rehearsals, her friends, and her masseuse job. After a blow up, Pete and Becky are still slated to meet Miriam and David for dinner the next night. Harry comes to dinner, as well, and the women rekindle their connection. Pete imagines the worst between Harry and his sister, and storms out of the house. The next day, Becky and Harry go to the beach together; Harry confesses her affection for Becky to Leon.

Later, Leon and Harry head to meet their new distributor at a sketchy club. The man, Joey, expects Harry to pay double the money for the same drug supply. When she refuses, Joey threatens to get violent, but before he can, Leon severely beats Joey. Harry steals Joey’s drugs and money, and the two leave the club. Afterwards, Harry worries about her own and Leon’s safety.

Rags explains to his brother, Uncle Ron, how he lost their money and drugs by leaving them alone at the club. Joey, Rags says, took the opportunity to make extra money for himself, but in the end, the supply was stolen by a woman named Harry. Ron worries that he will lose his restaurant, Giuseppe’s, which is funded by Pico.

Pete meets David’s son Dale at a family dinner with Miriam and David. At a bar after dinner, Pete asks Dale to ensure Becky is not providing any “extras” for her clients. Dale poses as one of Becky’s massage clients, but becomes interested in Becky himself. Becky does not provide more services than she told Pete she did.

At Pete’s surprise birthday party, Dale tells Becky that Pete asked him to pose as one of her clients. Ron and Rags also attend the party and figure out that Pete’s sister Harry is the drug dealer who had stolen from him. Ron and Rags threatens Harry. Knowing that she needs to leave town, Harry asks Becky to join her and Leon as they flee London. Becky agrees.

For the next eight months, Becky and Harry drive through Europe, while Leon hunkers down in Barcelona. The women are in love. But later, Becky realizes that she needs to return to London to be her own person. Harry meets with Pico and tells him that she is leaving the drug dealing business, no matter the cost.

More summaries and resources for teaching or studying The Bricks That Built the Houses.

The Bricks That Built the Houses from BookRags. (c)2022 BookRags, Inc. All rights reserved.