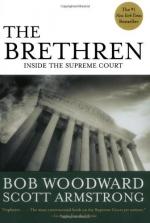 The Brethren: Inside the Supreme Court Summary & Study Guide

Bob Woodward
This Study Guide consists of approximately 48 pages of chapter summaries, quotes, character analysis, themes, and more - everything you need to sharpen your knowledge of The Brethren.

The Brethren: Inside the Supreme Court Summary & Study Guide Description

The Brethren: Inside the Supreme Court Summary & Study Guide includes comprehensive information and analysis to help you understand the book. This study guide contains the following sections:

This detailed literature summary also contains Topics for Discussion and a Free Quiz on The Brethren: Inside the Supreme Court by Bob Woodward.

The Brethren by Bob Woodward and Scott Armstrong examines the functioning of the Supreme Court during the period from 1969 to 1976. This time frame corresponds to the first seven years of Warren E. Burger's appointment as Chief Justice. The book offers fascinating insight into the workings of the Supreme Court. Woodward and Armstrong show the readers the personalities at work and how those personalities interact in reaching decisions. The book begins at the close of the Warren Court years. The reader is taken through the selection and nomination process of Warren E. Burger for the position of Chief Justice. Enough of the Warren Court is discussed for the reader to determine the differences between the approaches of Warren and Burger. Burger was more concerned with controlling the writing of the decisions during his tenure of the Court and would often change or remain undecided until ascertaining how the others voted.

Woodward and Armstrong allow the reader to become acquainted with the personalities of the various Justices as well as their views and styles. The likes and dislikes of each Justice is discussed and their closeness to their clerks is revealed. The mechanics of things and how those things get done is also revealed. The Justices spend a great deal of time talking with their clerks, since the clerks write most of the drafts and need to know the position of the Justice that they work for. In some ways, they also shape the opinion of the Justices. The Justices also have various social outings with their clerks, and in many cases, remain friends with them.

The book is written in the familiar style of Bob Woodward, with the off-the-record technique. This makes the book interesting and easy to read, like a novel. The inside look at the workings of the Court reveals the problems that the judges have as they struggle with various things like being shorthanded or having no mechanism in place to deal with the physically and mentally incapacitated William Douglas when he refused to retire after his stroke and the Justices have to try to protect the integrity of the Court decisions.

Many important cases come up before the Court during this period, and many of them are discussed in the book. The impressive feature here is the lack of discussion among the Justices, who spend more time discussing cases with their clerks rather than with each other. Another feature that stands out are the machinations of vote switching, since a Justice can change his vote until the decision is handed down. This was a tactic of Chief Justice Burger used to control the writing of the decision. Woodward and Armstrong hit hard at the shortcomings of Burger throughout the book, especially his way of controlling the assignments of decisions by waiting to announce his vote until the end.

Readers everywhere will find this book to be informative and enjoyable reading. It gives the readers a view of the Supreme Court that the reader could not normally obtain, a perspective that allows the reader to have no knowledge of law or the legal system and yet still be able to understand the book.

More summaries and resources for teaching or studying The Brethren: Inside the Supreme Court.

The Brethren: Inside the Supreme Court from BookRags. (c)2022 BookRags, Inc. All rights reserved.