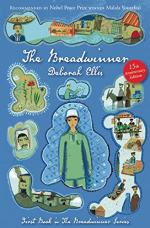 Deborah Ellis
This Study Guide consists of approximately 49 pages of chapter summaries, quotes, character analysis, themes, and more - everything you need to sharpen your knowledge of The Breadwinner.

The Breadwinner Summary & Study Guide includes comprehensive information and analysis to help you understand the book. This study guide contains the following sections:

This detailed literature summary also contains Quotes and a Free Quiz on The Breadwinner by Deborah Ellis.

Readers catch a glimpse into the lifestyle of Afghans in Taliban controlled Kabul in the novel The Breadwinner, by Deborah Ellis. Upon her father's arrest by the Taliban, eleven-year-old Parvana had to be disguised as a boy and sent to earn a living to keep her family alive. The novel explores changes in Kabul, the unjust treatment of women by the Taliban, and the persistence of kindness and humanity despite the war's ugliness.

Because her father had lost one of his legs in a bombing, eleven-year-old Parvana was allowed to help him walk to his job in the Kabul marketplace as a letter reader and writer. Her mother, sister, and two younger siblings spent each day, all day, cooped up in a one-room apartment. Laws put in place by the Taliban leaders treated women unjustly. Women were not allowed to go to school, have jobs, or go out in the street unless they were wearing a burqa. Even when wearing a burqa the women were supposed to be accompanied by their husband or another man.

One night during dinner, the Taliban burst into the apartment where Parvana and her family lived. They arrested her father. Because she was the one most likely to pass as a boy, Parvana’s hair was cut and she was dressed in clothing that had belonged to her older brother, Hossain. Hossain had been killed by a land mine. Disguised as a boy, Parvana took her father’s place in the marketplace reading and writing letters. With the help of her classmate, Shauzia, who was also masquerading as a boy to support her family, Parvana even dug up bones in a nearby cemetery for a few weeks to earn extra money so the two could buy trays from which they could sell goods. The girls hoped they would be able to make a better living for their families if they could use these trays to move easily with the crowd.

Working in the streets, Parvana witnessed a good deal of ugliness. She saw the poverty, need, and hurt felt by the people of Kabul. Believing there was going to be a soccer match, she and Shauzia walked into the town’s sports stadium only to witness a public show of corporal punishment by the Taliban. In spite of the ugliness on the streets, Parvana also saw some evidence of humanity among the people with whom she worked. She was surprised when she saw a member of the Taliban cry when she read to him a letter that had been written to his deceased wife. A woman who lived in the room above the spot where Parvana worked would periodically drop small gifts on Parvana’s blanket or head. As a thank you to her unknown friend, Parvana planted flowers in the spot where she’d worked.

Parvana’s older sister, Nooria, received a proposal of marriage prompting the family to go to Mazar for the wedding. Parvana was left behind because her mother was afraid it would be too difficult and too dangerous to explain Parvana’s short hair. While staying at the apartment with Mrs. Weera, a friend of the family, Parvana found a woman hiding in a bombed out building. She took the woman home. The woman told Parvana and Mrs. Weera she had come from Mazar where the Taliban had just taken control of the city. Meanwhile, Parvana’s father had been released from prison and had returned home. At the conclusion of the novel, Parvana and her father had found transportation to Mazar in an attempt to find their family.

More summaries and resources for teaching or studying The Breadwinner.

The Breadwinner from BookRags. (c)2022 BookRags, Inc. All rights reserved.