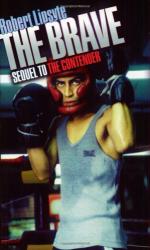 Get The Brave from Amazon.com
View the Study Pack
Study Guide
Order our The Brave Study Guide

Robert Lipsyte
This Study Guide consists of approximately 24 pages of chapter summaries, quotes, character analysis, themes, and more - everything you need to sharpen your knowledge of The Brave.

The Brave Summary & Study Guide includes comprehensive information and analysis to help you understand the book. This study guide contains the following sections:

This detailed literature summary also contains Topics for Discussion on The Brave by Robert Lipsyte.

The Brave by Robert Lipsyte tells the story of Sonny, a half-white, half-Indian 17-year-old boy with a talent for boxing. Dissatisfied with his life on the Reservation, he heads off to the big city to join the army. Before he can sign up, he is targeted by drug traffickers who reel him into their cause. When he is busted, Sonny is faced with a choice regarding his future. He discovers that boxing goes far beyond the ring.

Sonny has real talent in the ring, but when he fights, he feels a monster rising up within him. It makes him want to lash out and crush the other opponent without thought. His great uncle, Jake, feels as if Sonny has great potential for harnessing the monster, which he calls the hawk. He wants Sonny to continue in Indian tradition by becoming a Running Brave. The Running Braves were men who were specially trained to stand up for and protect members of the Moscondaga tribe. Sonny doesn't want to have anything to do with that.

He decides to join the Army, and he heads to New York City to find his mother so she can sign the papers that will allow him to join the Army since he is under age. Fresh off the bus, he is targeted by a drug dealer who wants to use him as a runner. In his naivety, Sonny doesn't realize what is going on and allows the dealer to befriend him. He is arrested on his very first run.

While in prison, Sonny begins to connect with his heritage. He is beaten up then released into the care of a police officer who works with Jake to train the boy for the ring. During this period of training, Sonny learns to work hard both in the ring and out of it. He also has the opportunity to re-evaluate his life situation and learn how to exercise his mind as well as his body so that he can tap into the strength of the monster when it arises.

Martin is a boy Sonny's age whose job it is to help Sonny with his training. At first they don't get along, but Martin has a great respect for Jake, and eventually the two become good friends. They decide to take on the amateur circuit since that is the easiest way to the top. However, circumstances force Sonny to go immediately into the professional circuit, which is much more difficult. With the support of Jake, the police officer, Martin, and Martin's family, Sonny is up to facing the challenge. While this is all happening, Brooks, the police officer who has become like a father to Sonny, continues to fight to get drugs off the street. Sonny is faced with a decision in regards to who his friends truly are. He also has to come to terms with the idea of what is right and wrong out on the streets as well as in the ring.

More summaries and resources for teaching or studying The Brave.

The Brave from BookRags. (c)2022 BookRags, Inc. All rights reserved.