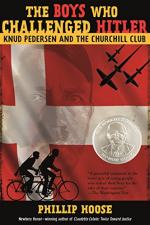 The Boys Who Challenged Hitler Summary & Study Guide includes comprehensive information and analysis to help you understand the book. This study guide contains the following sections:

This detailed literature summary also contains Quotes and a Free Quiz on The Boys Who Challenged Hitler by Phillip Hoose.

The following version of this book was used to create this study guide: Hoose, Phillip. The Boys Who Challenged Hitler. Farrar Straus Giroux, 2015.

The Boys Who Challenged Hitler focuses on the actions of the Churchill Club, a group of teenage boys who committed more than two-dozen actions against the Nazis in 1941 and 1942. In 1940, Germany occupies Denmark, suggesting that the country wants to protect the small nation from British and French forces, but really planning to use Denmark to ship iron ore from Sweden.

After Germany makes its intentions known, the Danish government quickly gives into their demands, signing off power to German after a single day of resistance. Many Danish citizens also seem neutral – or even supportive – of German occupation; some use the influx of German soldiers to advance their own interests. Few – if any – resistance movements rise in the country. In contrast, neighboring Norway, which was notified of German occupation on the same day, refuses to accept their German rulers. There, Norwegians citizens and government are mounting dangerous resistance movements with high death tolls.

This societal moment breeds the Churchill Club, a group of boys committed to Danish patriotism and Nazi resistance. The club is led by two brothers, 15-year-old Knud and 16-year-old Jens Pedersen. The brothers find many boys in their hometown of Aalborg with whom to mount increasingly-significant anti-German actions. First, the boys simple smash or misdirect street signs, but as they gain confidence, they commit acts of arson and steal German weapons.

Eventually, though, the authorities catch up with the Churchill Club, and they are sent to prison to await trial. There, the boys are mostly treated well – some jailors admired their bravery – and the Danish authorities do what they can so the boys receive the most lenient sentences possible. At the same time, Danes were divided: some thought the boys were foolhardy, while others respected their acts of patriotism.

During the trial, the boys do not go along with the Danish authority’s suggestion that they lie to minimize the seriousness of their actions. As such, the Churchill Club members are given several years in prison. Knud and his brother both receives three years in prison. The older members of their resistance are given five years in prison for stealing German grenades.

In prison, these older prisoners worked for months to create remove a bar from their jail cell window and replace it with a dummy bar. In the middle of night, the older men would remove the bar from the window and escape into the night – for nineteen nights in a row. There, they would wreak havoc against German cars or eat dinner with their families. They were searching for passage on a boat that would take them to Sweden. On the nineteenth night, the men were out of prison when an air raid came – the men were caught.

Afterward, the Churchill Club teens are taken to prison. They learn that the Churchill Club became a symbol of resistance, encouraging other Danes to commit actions against the Germans. The boys keep sane by thinking about the outside world, writing letters, and receiving tutoring from an interesting teacher.

In 1943, the Danish government officially refuses to recognize the German occupation and fought back, and in 1944, Knud and Jens are released from prison. Denmark is different; anyone who supported the Germans is now considered a traitor. Adjusting to civilian life is difficult for both brothers anyway. Knud wants to continue resistance work, but because of his easily-recognized face, he is not offered anything. Eventually, Knud is asked to move weapons for the Danish resistance, an action he performs successfully.

In 1945, the war ends, and after, Denmark works to transition back to a free country. In 1950, Winston Churchill hears of his namesake club, and, on a visit to Denmark, honors the Churchill Club members with a ceremony celebrating their bravery.

The book’s Epilogue details what happened to the Churchill Club members throughout their adult lives. While valiant, their participation in these anti-war efforts “scarred them for life in various ways,” according to author Phillip Hoose.

The Boys Who Challenged Hitler from BookRags. (c)2022 BookRags, Inc. All rights reserved.