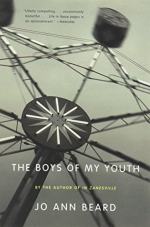 The Boys of My Youth Summary & Study Guide

Beard, Jo Ann
This Study Guide consists of approximately 35 pages of chapter summaries, quotes, character analysis, themes, and more - everything you need to sharpen your knowledge of The Boys of My Youth.

The Boys of My Youth Summary & Study Guide Description

The Boys of My Youth Summary & Study Guide includes comprehensive information and analysis to help you understand the book. This study guide contains the following sections:

This detailed literature summary also contains Quotes and a Free Quiz on The Boys of My Youth by Beard, Jo Ann .

The following edition of the book was used to create this study guide: Beard, Jo Ann. The Boys of My Youth. First Back Bay paperback edition. 1999.

“The Boys of My Youth” by Jo Ann Beard is a collection of 13 autobiographical essays that combine to form a collage-style memoir of the author’s life. The essays are not organized in chronological order, but are instead presented in a loose thematic order, with a number of themes subtly building on one another over the course of the collection. The essays range from sharing idyllic experiences — such as the author’s experience of watching Fourth of July fireworks with her family as a child in “Behind the Screen” — to terrifying ones, such as when the author’s small, pleasant office is shot up by a vengeful gunman in “The Fourth State of Matter.”

The collection begins with two very short essays, a Preface and “In the Current,” which share two images from the author’s youth. In the Preface, Jo recalls a pre-verbal memory where she repeatedly cries in her crib in the dark. “In the Current” shares Jo’s memory from a camping trip as a child, when she saw a group of teenagers being helplessly carried down a river before being rescued by adults at the campsite. “Bonanza” shares Jo’s childhood experience of being literally bored to tears while visiting her Grandma and her Grandma’s off-putting new husband, Ralph, in Knoxville.

“Cousins” builds a bridge to Jo’s teenage and young adult years. The essay details the relationship between Jo and a female cousin she calls Wendell, flashing back from scenes of their childhood to scenes from the adulthood, such as going to a bar together, and Wendell’s wedding. “Behind the Screen” returns to Jo’s childhood as she watches fireworks with her family. “Coyotes” details how Jo can get lost in her own thoughts, in this case while on a camping trip in Arizona with her boyfriend, Eric. “Against the Grain” is a brief essay that details Jo’s ex-husband’s perfectionist tendencies when he attempted to remodel the house when they were married.

“The Fourth State of Matter” unofficially begins the second half of the book, by delving into far more serious topics. The essay portrays a listless Jo, immediately following her marriage, as she works at a small, friendly office while endlessly puttering around the house. On a day when she happened to leave for home early, a vengeful gunman comes into the office and murders her beloved colleagues before shooting himself.

“Bulldozing the Baby” is the last essay in the collection that deals with an exclusively lighthearted topic: Jo’s deep and unbreakable connection with a gross childhood doll, which her aunt secretly steals and throws away in a rest stop trash can. “The Family Hour” shows Jo in the midst of her young childhood. Her father, while a kind, gentle man, is also a drunk, and one day he drunkenly crashes his car into an embankment, and walks five miles home bloodied and with all his teeth knocked out. “Waiting” details how Jo and her older sister, Linda, spend time in the hospital with their mother in the last days and hours of her own life. “Out There” briefly describes how Jo, on an impromptu road trip in the haze of her divorce, is threatened by a violent motorist on an isolated Alabama highway, who aggressively tails her for some time.

The titular essay, “The Boys of My Youth” is the final essay, by far the longest essay, and the cumulation of all the built-up themes. The essay bounces back and forth between scenes of Jo’s adolescence, as she hopelessly crushes over boys with her friend Elizabeth, and scenes from Jo’s thirties, when she and Elizabeth frequently call each other on the phone to discuss men in the light of both their divorces. It is revealed that Jo’s ex-husband, who had cheated on her during their marriage, is in fact the same Eric who had been her boyfriend, as depicted in “Coyotes.” In the present day, both women are excited for each other as they pursue new romantic prospects.

More summaries and resources for teaching or studying The Boys of My Youth.

The Boys of My Youth from BookRags. (c)2022 BookRags, Inc. All rights reserved.