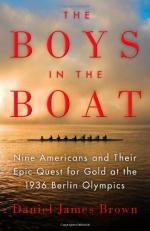 The Boys in the Boat: Nine Americans and Their Epic Quest for Gold at the 1936 Berlin Olympics Summary & Study Guide

Daniel James Brown
This Study Guide consists of approximately 62 pages of chapter summaries, quotes, character analysis, themes, and more - everything you need to sharpen your knowledge of The Boys in the Boat: Nine Americans and Their Epic Quest for Gold at the 1936 Berlin Olympics.

The Boys in the Boat: Nine Americans and Their Epic Quest for Gold at the 1936 Berlin Olympics Summary & Study Guide Description

The Boys in the Boat: Nine Americans and Their Epic Quest for Gold at the 1936 Berlin Olympics Summary & Study Guide includes comprehensive information and analysis to help you understand the book. This study guide contains the following sections:

This detailed literature summary also contains Topics for Discussion on The Boys in the Boat: Nine Americans and Their Epic Quest for Gold at the 1936 Berlin Olympics by Daniel James Brown.

The Boys in the Boat by Daniel James Brown is the story of the University of Washington rowing team that struggled through personal and professional battles to become America's unlikely representatives in the 1936 Berlin Olympic Summer Games. They won the Gold!

The Boys in the Boat is the story of an entire Olympic rowing team, but it focuses primarily on the life of Joe Rantz, one of the boys in the boat. Rantz had a particularly difficult childhood with his mother dying when he was only four. His widowed father married a cold, distant woman nearly twenty-years his junior. As a child, Joe was frequently abandoned as his father searched for work in Depression-era America. He was shuttled from one relative’s home to another. Eventually, he was left to fend for himself at the age of ten. Although his father would pop in and out of Joe’s life for the next few years, Joe was primarily on his own, working for a place to live, food, and very sparse pocket money. He learned to find value in what other people left behind, from foraged food to abandoned wood. Rantz was a farm boy not afraid of physical labor. As he grew, he became tall and strong. Despite the fact that he had been neglected and abandoned nearly his entire life, Joe’s spirit was resilient, and he never turned bitter. He continued to love his family, particularly his father, and hoped that one day they would be reunited. When he was seventeen, Joe’s older brother summoned him to Seattle to finish his final year of high school, and it was there that Joe met Al Ulbrickson, head rowing coach at the University of Washington. Ulbrickson, who immediately recognized Joe’s physical abilities, encouraged the boy to apply to the university and try out for the college rowing team.

Even though Joe was eventually admitted to the University of Washington, he had to take a full year off from school to raise enough money for his tuition. He knew he wouldn’t be able to attend without the small stipend awarded to members of the rowing team. When he finally arrived on the university campus, one of his first stops was the rowing shell house. Joe endured a long, arduous tryout process that whittled down a huge number of rowing hopefuls to a select handful. The boys who were chosen as part of the university's freshman rowing team all had one thing in common, tenacity. Despite the fact that the boys were all part of one team, there were clear divisions, with Joe often being singled out and teased for his impoverished background. Joe was extremely sensitive about his poverty and embarrassed by his raggedy clothes. Nevertheless, the boys rowed well together and soon began gaining local and international attention for their breathtaking wins over their major competitor California, as well as the established rowing teams on the Eastern coast.

Time passed, and the relationship between the boys in the boat eventually began to thrive. For the first time in his life, Joe felt that he had found somewhere he truly belonged. By the time Joe was a senior in college, his crew had qualified to represent the United States in the 1936 Olympic Games in Berlin, Germany. By this time, Joe was engaged to the love of his life. After the unexpected death of his stepmother, he reconciled with his father. When Joe set out to Germany in the summer of 1936, he was on top of the world and didn’t want to squander the opportunity. Joe’s feeling of hope and resilience was a stark contrast to what was happening in the rest of the world, with the Great Depression nearly crippling American economics, the rise of the Nazi Party in Germany, and the impending outbreak of the Second World War. Still, the Olympic Games provided a reprieve from all the stress as families around the world crowded around their televisions and radios to cheer on their national teams. The rowing final was one of the most prestigious events, with even Hitler himself coming out to watch. When the American team won gold, it was a shock to everyone, including the team itself. The boys in the boat had achieved what they had dedicated nearly four years of their life to obtaining, Olympic gold. For a boy like Joe Rantz, who had spent his entire life feeling like an outsider, he had proved his value once and for all. The feeling of accomplishment and belonging stuck with him for the rest of his life.

More summaries and resources for teaching or studying The Boys in the Boat: Nine Americans and Their Epic Quest for Gold at the 1936 Berlin Olympics.

The Boys in the Boat: Nine Americans and Their Epic Quest for Gold at the 1936 Berlin Olympics from BookRags. (c)2021 BookRags, Inc. All rights reserved.