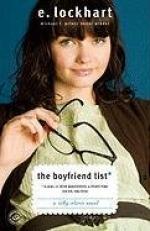 E. Lockhart
This Study Guide consists of approximately 36 pages of chapter summaries, quotes, character analysis, themes, and more - everything you need to sharpen your knowledge of The Boyfriend List.

The Boyfriend List is the humorous story of fifteen-year-old Ruby Oliver's quest to discover what about her love life has driven her to debilitating panic attacks.

After being dumped by her boyfriend and becoming "a leper" in school, fifteen-year-old Ruby Oliver has begun suffering from panic attacks that leave her heart racing, her brow sweaty, and her legs shaking. Her parents, worried that she might be becoming anorexic, order her to the care of Doctor Z, a neighborhood psychologist. Figuring that Ruby's panic attacks might have something to do with the plethora of romantic relationships she's been having, Doctor Z gives Ruby the assignment of chronicling her love life, from the moment she felt her first romantic flutter, until now. Although she's initially reluctant of the task, Ruby wracks her brain and comes up with a list of the top fifteen guys she thinks have had the strongest impact on her life.

The first boyfriend Ruby remembers having is Adam Cox in preschool. When they first started playing together, the two were inseparable. When they got older, however, they split up to attend different schools and Ruby didn't see Adam again until she was in high school and their schools met up for an interschool dance. Adam was embarrassed to be seen with her and wanted nothing to do with her, even insulting her glasses, calling her "Four Eyes," in front of everyone. Ruby realizes that she's not as popular as she thinks and suddenly, she cares about whether boys like her or not.

Through each of the fifteen reminiscences, Ruby draws the reader back to her current situation and pieces of the puzzle eventually fit together, giving the reader a firm grasp of what Ruby truly is going through. Ruby's first real boyfriend, Jackson Clarke, has just broken up with her after six blissful months together and Ruby didn't even see it coming. A week before Jackson broke up with her, he invited Ruby to the Spring Fling and she had already purchased an expensive dress. The day after Jackson broke up with her, Ruby found out that he was dating her best friend Kim. Since Ruby and Kim had told each other everything about their romantic hopes and dreams, Ruby was especially devastated, feeling that Kim had betrayed her. After hearing about Kim and Jackson, Ruby had her first panic attack. It certainly wouldn't be her last. A few days before Spring Fling, Jackson called to say that Kim was going to be out of town for the weekend and would Ruby still like to attend the dance with him? Even though she knew it was a bad idea, Ruby agreed, secretly hoping that once Jackson saw her in her silver dress, he'd realize that he made a terrible mistake.

On the day of the dance, Ruby's heart fluttered with excitement. She and Jackson had a great time together and at least in Ruby's eyes, it became clear that Jackson still had feelings for her. When she thought no one else was looking, Ruby leaned in and kissed Jackson. He definitely kissed her back. Unfortunately, they weren't alone and the biggest gossip in school, Heidi, told everyone that Ruby was throwing herself at Jackson and that he turned her down. Word got back to Kim and when she returned home from vacation with her family, she began writing nasty messages about Ruby all over the school. Soon, no one - not even the biggest geeks in school - would talk to Ruby.

After going through the list with Doctor Z, Ruby realizes that rarely speaks her mind with boys and as a result, she is walked over. She decides to make a change and for the first time in her life, feels free.