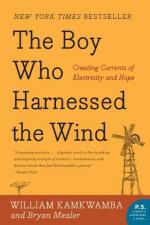 The Boy Who Harnessed the Wind: Creating Currents of Electricity and Hope Setting & Symbolism

Africa, and in particular many of its southern countries, is a land of long-standing poverty, lack of technological innovation, and political corruption and, as portrayed here, feels and sounds in many ways like a world from the past, with its references to faith in magic rather than science, its atmosphere of a pervasive lack of sophistication and general air of raw, teeming need. This fact combines with a second - the fact that the events of the narrative take place in the early years of the new millennium, the early 2000's, to create a startling context for the narrative as a whole. This is the jarring awareness that, in a world where prosperity and technological sophistication is taken for granted by so many, so many others could be living in such subsistence conditions. See "Topics for Discussion - Consider and contrast your life in the year ..."

The Boy Who Harnessed the Wind: Creating Currents of Electricity and Hope from BookRags. (c)2023 BookRags, Inc. All rights reserved.